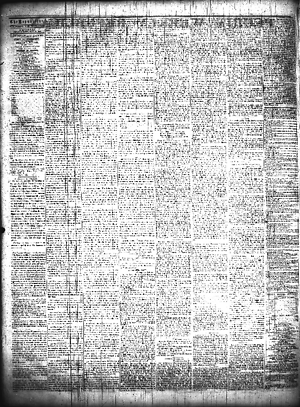 Summary of Speech at Chicago, Illinois, 19 July 18561
LINCOLN IN CHICAGO.
We had the pleasure of listening to the speech of Hon. Abram Lincoln in Chicago last Saturday evening. He spoke in Dearborn Park, and was listened to by a very large audience. The speech was one that did him eminent credit, and which cannot not fail to produce a telling effect upon the political sentiment of Chicago. The exposure of the fallaciousness of the position taken by Mr. Fillmore in his Albany speech was timely and effective; and his refutation of the charge of sectionalism, so flippantly made by the slavery-extensionists against the Republican party, was full and able.2 Every point he touched upon was elucidated by the clearness of his logic, and with his keen blade of satire he laid bare the revolting features of policy of the pseudo-Democracy. At the close of his speech he was enthusiastically and repeatedly cheered, and he was frequently interrupted during its delivery with hearty and prolonged applause.
We hope ere long to be able to announce a speech from Mr. Lincoln in our own city.3
1On July 25, 1856, the Peoria Republican published this summary of the speech that Abraham Lincoln delivered in Chicago, Illinois on July 19. The Daily Democratic Press also published a summary of the speech on July 21. The original speech in Lincoln’s hand has not been located.
Daily Democratic Press (Chicago, IL), 21 July 1856, 3:1.
2During the campaign for the presidential election of 1856, the American Party nominated Millard Fillmore as its candidate for president during the party’s February 1856 national nominating convention in Philadelphia, Pennsylvania. Fillmore was traveling in Europe at the time of his nomination, but accepted via letter and arrived in New York City on June 22. He delivered speeches in numerous towns on his return to Buffalo, New York. In his “Union Speech,” delivered in Albany, New York on June 26, Fillmore called the Republican Party, which had nominated John C. Fremont as its first national convention, a “sectional party” that represented only the interests of the free states of the nation. He argued this was dangerous, and that if the Republican Party gained power it would lead “inevitably to the destruction” of the nation.
Frank H. Severance, ed., Millard Fillmore Papers, vol. 11 of Publications of the Buffalo Historical Society (Buffalo, NY: Buffalo Historical Society, 1907), 2:3, 19, 21-22.
3In preparation for the 1856 Federal Election, Lincoln stumped on behalf of the Republican Party from July through November 1856. He delivered a speech in Peoria, Illinois on October 9, 1856. Lincoln’s efforts were for naught: James Buchanan, the Democratic Party candidate, defeated Fremont and Fillmore in the presidential election of 1856. Buchanan carried Illinois with 44.1 percent of the vote to Fremont’s 40.2 percent and Fillmore’s 15.7 percent.
Michael Burlingame, Abraham Lincoln: A Life (Baltimore: The Johns Hopkins University Press, 2008), 1:426-28, 432; Philip G. Auchampaugh, “Campaign of 1856,” Dictionary of American History, rev. ed. (New York: Charles Scribner’s Sons, 1976), 1:420-21; Howard W. Allen and Vincent A. Lacey, eds., Illinois Elections, 1818-1990 (Carbondale and Edwardsville: Southern Illinois University Press, 1992), 10; The Lincoln Log: A Daily Chronology of the Life of Abraham Lincoln, 9 October 1856, http://thelincolnlog.org/Results.aspx?type=CalendarDay&day=1856-10-09; 1 November 1856, http://thelincolnlog.org/Results.aspx?type=CalendarDay&day=1856-11-01.