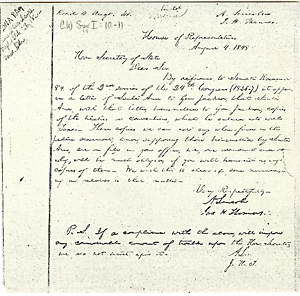 Abraham Lincoln and James H. Thomas to James Buchanan, 4 August 1848.1
House of Representatives
August 4. 1848 Hon: Secretary of State Dear Sir:
By reference to Senate Document 84. of the 2nd session of the 24th Congress (1836-7) it appears in a letter of Santa Ana to Gen: Jackson, that Santa Ana, with that letter, transmitted to Gen: Jackson, copies of the treaties or conventions, which he entered into with Texas—2 These copies we can not any where find in the public documents; and, supposing those transmitted by Santa Ana, are on file in your office, we, one democrat and one whig, will be much obliged, if you will transmit us, engli[sh] copies of them— We wish this to clear up some misunderstanding in relation to that matter—3
Very Respectfully— A Lincoln Jas H ThomasP.S. If a compliance with the above, will impose any considerable amount of trouble upon the Hon: Secretary, we do not insist upon it—A. L. J. H. T. 4
1Abraham Lincoln wrote the body of the letter and signed his name. James H. Thomas signed his own name. Lincoln wrote the postscript and both sets of initials. Original autograph letter signed not found in Record Group 59, Records of the Department of States, National Archives, College Park, MD.
2Lincoln and Thomas were referencing a letter from General Antonio de Lopez Santa Anna to President Andrew Jackson dated July 4, 1836. This correspondence was part of the aftermath of the Texas Revolution of 1836. On April 21, 1836, Texas forces routed Santa Anna and his army at the Battle of San Jacinto, and on April 22, the Texans took Santa Anna prisoner. On May 14, Santa Anna signed two treaties, one public and one private, which together became known as the Treaty of Velasco. In the public treaty, he agreed to end hostilities, and in the private and confidential agreement he agreed to work to persuade the Mexican government to accept Texan independence. In exchange for these treaties, the Texans agreed to free Santa Anna and allow him to return to Mexico. The Mexican Government, however, repudiated the public agreement, arguing that it was invalid because Santa Anna was a prisoner when it was concluded. Santa Anna remained a prisoner, and he wrote President Jackson on July 4, requesting his assistance in securing his release and in ending hostilities between Texas and Mexico. He enclosed copies of the public and private agreements. Jackson penned a sympathetic response on September 4, regretting that he could neither affect Santa Anna’s release nor interfere in the conflict unless the governments of the contending parties requested the United States’ good offices. Jackson, in the meantime, was working behind the scenes to insure Santa Anna’s safety and American neutrality over Texan independence. In a letter to Lewis Cass on September 5, Jackson cautioned that his correspondence and the secret agreement were not to be made public.
Will Fowler, Santa Anna of Mexico (Lincoln: University of Nebraska Press, 2007), 171-73, 175, 176, 177-81, 378; Robert V. Remini, Andrew Jackson and the Course of American Democracy, 1833-1845 (New York: Harper & Row, 1984), 357-64, 579-80, n60; John Spencer Bassett, ed., Correspondence of Andrew Jackson (Washington, DC: Carnegie Institution of Washington, 1931), 5:411-12, 425-26.
3On January 14, 1837, Senator John Davis moved a resolution calling upon President Jackson to submit to the Senate any correspondence between him and Santa Anna, or any other person authorized to act on the behalf of Mexico, “respecting the independence or future disposition and civil condition of Texas.” The resolution also called for any correspondence between foreign governments on the Texas issue. On January 16, the Senate adopted the resolution. On January 19, Jackson complied with the resolution by submitting a copy and a translation of Santa Anna’s July 4 letter, along with his reply of September 4. “No other communication on the subject of the resolution,” Jackson wrote in his letter of transmission dated January 18, “referred to has been made to the Executive by any other foreign Government, or by any person claiming to act in behalf of Mexico.” Jackson did not include a copy of the Treaty of Velasco. Ironically, Santa Anna had been released and was on his way to Washington, DC, to meet with President Jackson. Santa Anna arrived in Washington on January 17, and met with Jackson on January 19.
There are minor differences in the correspondence as recorded in the Congressional Globe and in the 1931 edition of Jackson’s correspondence.
U.S. Senate Journal. 1837. 24th Cong., 2nd sess., 116-17, 121, 136; Cong. Globe, 24th Cong., 2nd Sess., 98, 108-9 (1837); Robert V. Remini, Andrew Jackson and the Course of American Democracy, 1833-1845, 364-66; Will Fowler, Santa Anna of Mexico, 183; John Spencer Bassett, ed., Correspondence of Andrew Jackson, 5:411-12, 425-26.
4Buchanan responded to Lincoln and Thomas on August 5, informing them “that it is not in the power of this Department to comply with your request.” Special thanks to Jesse Derber for bring the existence of this letter to our attention.
John Bassett Moore, ed., The Works of James Buchanan: Comprising his Speeches, State Papers, and Private Correspondence (Philadelphia: J. P. Lippincott, 1909), 8:152.