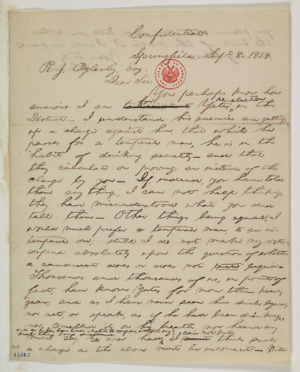 Abraham Lincoln to Richard J. Oglesby, 8 September 18541
Confidential
Springfield, Sept 8. 1854. R. J. Oglesby, Esq.[Esquire] Dear Sir:
You perhaps know how anxious I am to re-elect ^for^ Yates’ ^re-election^ in this District–2 I understand his enemies are getting up a charge against him, that while he passes for a temperate man, he is in the habit of drinking secretly— and that they calculate on proving an instance of the charge by you— If, indeed, you have told them any thing, I can not help thinking they have misunderstood what you did tell them— Other things being equal, I would much prefer a temperate man, to an intemperate one; still I do not make my vote depend absolutely upon the question of whether a candidate does or does not taste liquor–
Thousands and thousands of us, in point of fact, have known Yates for more than twenty years; and as I have never seen him drink liquor, nor act, or speak, as if he had been drinking, nor smelled it on his breath, nor heard any man say he ever had ^and as he has been twice elected to congress, without any such thing being discovered.^ I must ^can not but^ think such a charge as the above must be incorrect– Will
<Page 2>
you please write me, and tell me what the truth of this matter is? I will reciprocate at any time–3
Yours truly A. Lincoln–
1Abraham Lincoln wrote and signed this letter.
2Following the passage of the Kansas-Nebraska Act and the repeal of the Missouri Compromise, Lincoln was moved to reenter politics by campaigning in the autumn of 1854 for the reelection of Sixth Congressional District Whig representative Richard Yates. Democrat Thomas L. Harris defeated Yates by 200 votes in the general election in November 1854, garnering 50.5 percent of the vote to Yates’s 49.5 percent. See 1854 Federal Election.
David Herbert Donald, Lincoln (New York: Simon & Schuster, 1995), 167-73; Autobiography of Abraham Lincoln Written for John L. Scripps; Abraham Lincoln to Richard Yates; Howard W. Allen and Vincent A. Lacey, eds., Illinois Elections, 1818-1990 (Carbondale and Edwardsville: Southern Illinois University Press, 1992), 10.
3No response to this letter has been found. At later points in his career, Yates was reportedly visibly intoxicated at public events and in a public address at the end of Andrew Johnson’s 1868 impeachment trial, Yates stated that he was at times a drinker and had at one point abstained from alcohol for ten years.
Robert P. Howard, Mostly Good and Competent Men: Illinois Governors, 1818-1988 (Springfield, IL: Illinois Issues, Sangamon State University and Illinois State Historical Society, 1988), 122, 124, 130-31.