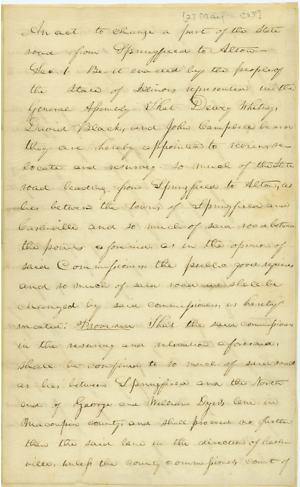 A Bill to Change Part of the State Road from Springfield to Alton, 6 February 18351
An act to change a part of the State road from Springfield to Alton—
Sec.[Section] 1. Be it enacted by the people of the State of Illinois represented in the General Assembly. That Dewey Whitney, David Black, and John Campbell be and they are hereby appointed to review, relocate and resurvey so much of the State road leading from Springfield to Alton, as lies between the towns of Springfield and Carlinville and so much of said road between the points aforesaid, as in the opinion of said Commissioners, the public good requires and so much of said road as shall be changed by said commissioners, is hereby vacated: Provided That the said commissioners in the resurvey and relocation aforesaid, shall be confined to so much of said road as lies between Springfield and the North end of George and William Dyer's lane in Macoupin county and shall proceed no further than the said lane in the direction of Carlinville, unless the county commissioner's court of
<Page 2>
Macoupin county shall first consent to the same, in which case the said commissioners may continue their resurvey and relocation to the public square in Carlinville
Sec 2nd Said commissioners or a majority of them shall meet in the town of Springfield on the first Monday of May next, or within one month thereafter, and after being first duly sworn before some Justice of the peace, faithfully to perform such duties are as are required by this act, shall commence said location at the town of Springfield, and as soon thereafter as practicable make out a [true?] true survey and map, of so much of said road as shall be changed by them and file the same in the office of the clerk of the county commissioners court of Sangamon and Macoupin counties provided, that it shall not be necessary to file a map with the clerk of Macoupin county, unless some part of said road should be changed, which lies in Macoupin county
Sec. 3. So much of said road as shall be
<Page 3>
relocated and resurveyed as aforesaid, shall be deemed a public highway and shall be worked and kept in repair as other State roads are. The county commissioner's court of Sangamon county, shall allow said commissioners a reasonable compensation for their services— to be paid out of the County Treasury—
Approved Feb 6. 1835.
Joseph DuncanJames Semple
Speaker of the House of RepresentativesA. M. Jenkins
Speaker of the Senate
[certification]
05/27/1835
Moffett, Thomas (Moffitt)Campbell, JohnWhitney, Dewey
We Dewey Whitney & John Campbell Two of the commissioners appointed in & by the act of the Genl Assembly of the State of Illinois, of which the above is a Copy— upon our Oaths do say, that we will, according to the best of our Skill & understanding, faith fully perform the duties assigned us as Commissioners aforesaid, according to the provisions of Said act
Dewey WhitneyJohn Campbell
Sworn to and Subscribed this 27th day of May 1835
Before me
Thomas Moffett Justice of the Peace
<Page 4>
[docketing]
Lincoln, Abraham (President)
Road from Springfield to Alton
1This handwritten transcription of the enrolled copy of the bill, including the signatures of the Speakers of the House and Senate, was written by Abraham Lincoln. The commissioners’ return at the end was written by Thomas Moffett and signed by Dewey Whitney and John Campbell.
On January 14, 1835, John T. Stuart presented to the House of Representatives a petition from citizens of Sangamon County requesting a change in part of the state road leading from Springfield to Alton. Stuart introduced HB 125 in the House on January 17. On January 19, the House referred it to a select committee. The select committee reported back the bill on January 22 with an amendment, in which the House concurred. The House passed the bill as amended on January 24. The Senate concurred on February 2. On February 6, the Council of Revision approved the bill and the act became law.
Illinois House Journal. 1835. 9th G. A., 1st sess., 289, 312, 330, 353, 376, 473; Illinois Senate Journal. 1835. 9th G. A., 1st sess., 326, 349, 388, 401, 445, 448, 454; Illinois House Journal. 1835. 9th G. A., 2nd sess., 399, 401, 411.