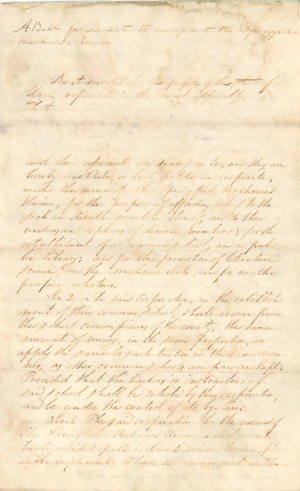 A Bill to Incorporate the Springfield Mechanics’ Union, [13 January 1840]1
A Bill for an act to incorporate the Springfield Mechanic's Union2
Be it enacted by the people of the state of Illinois, represented in the General Assembly, That and their associates, and successors be, and they are hereby constituted, a body politic and corporate, under the name of The Springfield Mechanics' Union, for the purpose of affording relief to the sick and disabled members thereof, and to the widows and orphans of deceased members; for the establishment of a common school, and a public Library; and for the promotion of literature[,] science, and the mechanic arts; and for no other purpose whatever.3
Sec.[Section] 2. The said corporation, on the establishment of their common school, shall receive from the school commissioners of the county, the same amount of money, in the same proportion, and apply the same to such tuition in the same manner, as other common schools are paid and kept: Provided that the teachers or instructors of said school shall be selected by the corporation, and be under the control of its by-laws.
Sec. 3. The said corporation by the name of The Springfield Mechanics Union, is declared and hereby made capable in law to sue and be sued, plead and be impleaded; to have a common seal, and the
<Page 2>
same to alter or renew at pleasure; to make and adopt a constitution and by-laws for the government of the corporation, not inconsistent with the laws of this state, or the Constitution of the United States, and the same to alter or amend whenever it may be deemed necessary; provided that the said corporation shall not hold more than five acres of land with the improvements thereon, for a longer term than one year, except such as may be donated to, and for the sole use and behoof of the corporation.
Sec. 4. The officers of this corporation shall consist of a President, Vice President, Secretary, Treasurer, and a board of seven Directors, who shall continue in office for the term of one year, and until their successors are elected, together with such other officers as may be provided for by the constitution and by-laws of the corporation. The duties, rights, privileges, and liabilities of the aforesaid officers, to be defined by the constitution and by-laws of said corporation.
Sec. 5. All fines and forfeitures for non attendance, delinquency imposed by the constitution and by-laws provided for in the four third section of this act, not exceeding twenty five dollars, in any individual case, shall be recoverable by action of debt, before any justice of the peace of the proper County, by the said Company in their corporate capacity, which shall be for the use of the corporation.
Sec. 6 This corporation shall not be dissolved nor a dividend made of its funds, while there are seven resident members in favor of its continuance.
Sec. 7. The legislature hereby reserve the right to amend or repeal this act, whenever, in their opinion, the public good may require it.
<Page 3>
Sec. 8. This act to be in force from and after its passage.
<Page 4>
[docketing]
S. B.[Bill]
[docketing]
2
[docketing]
Lincoln, Abraham (President)
A Bill for an act to incorporate the Springfield Mechanic's Union—
[docketing]
01/02/1840
ord[ordered] to be engrossed.
[docketing]
54
[docketing]
13
[docketing]
12/17/1839
ord 2d Reading
1Abraham Lincoln wrote the title of the bill on pages one and four.
2Lincoln presented a petition from the mechanics of Springfield to the House of Representatives on December 17, 1839, requesting the incorporation of a Springfield mechanics’ union and the House referred it to a select committee, which included Lincoln. Lincoln added an amendment to the bill before its introduction. The committee reported back on December 19 and Lincoln introduced the bill. The House passed the bill on January 13, 1840. The Senate passed the bill on February 1. The Council of Revision approved the bill on February 3 and the act became law.
Illinois House Journal. 1839. 11th G. A., special sess., 44, 59, 118, 152, 161, 324, 326, 338; Illinois Senate Journal. 1839. 11th G. A., special sess., 109-10, 231.
3The bill as originally written did not include the names of incorporators. Lincoln’s amendment added before the bill’s introduction included the names of the incorporators. All the incorporators listed by Lincoln had signed the petition for a mechanics’ union.