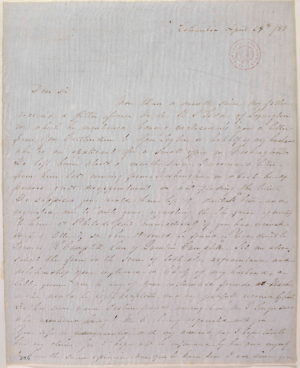 Ann E. Campbell to Abraham Lincoln, 29 April 18491
Columbia April 29th/49Dear sir
More than a month since my father received a letter from Uncle R S Todd of Lexington in which he mentioned having enclosed to you a letter from Gov Crittenden to Gen Taylor in behalf of my husband who is an applicant for a small office in Washington.2 He left home about a month since, I received a letter from him last evening from Washington in which he expresses great disappointment in not finding the letter. He supposed you would have left it, directed to him, and requested me to write you, requesting the the favor of writing to him at Philadelphia immediately if you had received such a letter if so where it could be found. Please direct to Thomas M "Campbell Care of Quentin Campbell"– Let me also solicit the favor in the [score?] of both old acquaintance and relationship your influence in behalf of my husband, a letter from you to any of your influential friends at Washington would be highly acceptable– and very gratefully received by him3 He has some warm Eastern friends among them Mr. I Ingersal who mentioned being to Mr C. being acquainted with you Your wife is acquainted with my husband, and I hope thinks him very [clever?]– You I hope will be influenced by her and myself to have the same opinion—were you to know him I am sure you
<Page 2>
would–4 Please remember me most affectionately to Mary– I shall be delighted to once more see my dear relations at Springfield They are, and [now?] we will be among my highlest and dearest memoriesBe kind enough to remember me to all of them– and excuse in me the trouble I have given you– and believe me
sincerely your friend and cousinAnn E CampbellLest you have forgotten ask Mary who I am–
1Ann E. Campbell wrote this letter and the postscript and signed the letter.
2On February 20, 1849, Robert S. Todd wrote Abraham Lincoln a letter enclosing letters from David Todd and John J. Crittenden on behalf of Thomas C. Campbell. David Todd’s letter is extant, but Crittenden’s letter was not among the enclosures, and its whereabouts is unknown.
3Lincoln’s letter endorsing Campbell, if he penned one, has not been located.
4Campbell did not receive an appointment in 1849, but he did become postmaster of Boonville, Missouri, in 1861, a position he held throughout the Civil War.
The National Almanac and Annual Record for the Year 1863 (Philadelphia, PA: George W. Childs, 1863), 189; Register of Officers and Agents, Civil, Military, and Naval, in the Service of the United States, on the Thirtieth September, 1861 (Washington, DC: Government Printing Office, 1862), *275; Register of Officers and Agents, Civil, Military, and Naval, in the Service of the United States, on the Thirtieth September, 1865 (Washington, DC: Government Printing Office, 1866), *187.