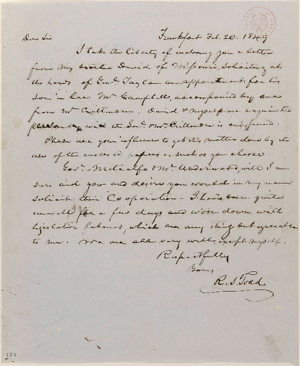 Robert S. Todd to Abraham Lincoln, 20 February 18491
Frankfort Feb. 20: 1849Dear Sir
I take the liberty of enclosing you a letter from my brother David of Missouri, soliciting at the hands of Genl Taylor an appointment for his son in law Mr Campbell, accompanied by one from Mr Crittenden. David & myself are acquainted personally with the Genl & Mr Crittenden is our friend.2
Please use your influence to get this matter done by the use of the enclosed papers or such as you choose.
Govr Metcalfe & Mr Underwood, will I am sure aid you and desire you would in my name solicit their cooperation— I have been quite unwell for a few days and worn down with legislative labours, which are any thing but agreeable to me. We are all very well, except myself.
Respectfully YoursR. S. Todd
<Page 2>
[endorsement]
Lincoln, Abraham (President)
Recommendation sent to Home Dept[Department]
<Page 3>
[enclosure]
02/03/1849
David ToddColumbia, MissouriTodd, Robert S.
David Todd to Robert S. Todd
David Todd to Robert S. Todd, 3 February 18493
Columbia Mo 3. Feby 1849.Dear Robert.
I take the liberty of enclosing you a proposed recommendation of my son in law Mr Thomas M. Campbell of Boonville in this state, for an appointment as a clerk in some of the departments at Washington, under the in coming administration. He is in dependant in circumstances, owing to a failure in mercantile concerns, a few years back, as is universally believed by over confidence in a manager of his concerns, who stripped him—and is revelling upon his means. His energy has supported himself and family, and can yet do so—but a situation now desired, would place him in a more comfortable position. Those, who are in the west, have been, for years placed by the action of the General as well as state governments, in perfect dependance, without the least aid from official station; and it is only by the election power for small offices, that, any, opposing the democracy can obtain the least favor. It is thus, now, in the five states adjoining, arkansas, missouri, Iowa, wisconsin & Illinois. I venture, to say, that in neither, is an office held under state of U.[United] States appointment, by a whig: and you know Mr Lincoln, is the only Whig member of Congress, from either.4 Should things so continue, or if the new administration, for want of information, or other cause, remain indifferent to our condition, we should remain the lowest serfs of party in the union. We have never yielded a contest for our principles, and from the causes stated a better set of whigs, and better qualified, for office, exist no where, than in the west. I rather offer these remarks as an excuse for troubling you, with the application named—
<Page 4>
than for any other. Mr Campbell was raised in Philadelphia, his father Mr Q. Campbell is alive, and he will receive aid from his friends in that quarter. I desire also to aid him, if I can; and recommend him as a well informed, intelligent man, about 40 years old, with a small family to support, of unquestioned integrity and good morals.
I desire to you to present my wishes, with the recommendation to Mr Crittenden, and obtain a letter from him, or an endorsement on mine, as he may desire—and that your own be added in some form—and that you by letters to Govr[Governor] Metcalf and Judge Underwood, request their letters or recommendations to the proper department and enclose the whole to Mr Lincoln, with a request that he add his efforts, and place them before the department after the inauguration.
You will greatly oblige me in this matter, if you will take the interest in it, that I solicit, for I feel myself, rather presuming too much, to act more open in it, had I power to effect, any thing, which I confess I have not.
My family are in good health: my oldest son for 18 mos.[months] has been in Louisiana, (at Bastrop) practicing law, successfully; my other (a physician) follows him; next month. Of them, I have no fears—for they are strictly moral, persevering, and qualified in their professions—with ideas of strict economy, which they practise upon. My youngest daughter is finishing school. Saml B. Todd enjoys better health than usual, his family are well—so with R. Worth's family—5 I farm a little, and peddle the law out, and make a living—and enjoying health, feel contented. Let me hear oftener from you
affectionatelyDavid Todd.6
1Todd wrote the letter in its entirety. Lincoln penned the endorsement on page two.
2John J. Crittenden’s letter is not included in the enclosures.
3Todd penned this letter in its entirety.
4Todd was correct; Lincoln was the only Whig among the seventeen members of the House of Representatives from these respective states in the 30th Congress. Prior to Wisconsin becoming a state in June 1848, however, the Wisconsin Territory had a Whig as a non-voting member.
Kenneth C. Martis, The Historical Atlas of Political Parties in the United States Congress, 1789-1989 (New York: MacMillan, 1989), 100-101; “Tweedy, John Hubbard,” Biographical Directory of the American Congress (Washington: Government Printing Office, 1950), 1939.
5Worth could not be identified.
6Campbell did not receive a position in 1849, but he did become postmaster of Boonville in 1861, a position he held throughout the Civil War.
The National Almanac and Annual Record for the Year 1863 (Philadelphia, PA: George W. Childs, 1863), 189; Register of Officers and Agents, Civil, Military, and Naval, in the Service of the United States, on the Thirtieth September, 1861 (Washington, DC: Government Printing Office, 1862), 275; Register of Officers and Agents, Civil, Military, and Naval, in the Service of the United States, on the Thirtieth September, 1865 (Washington, DC: Government Printing Office, 1866), 187.