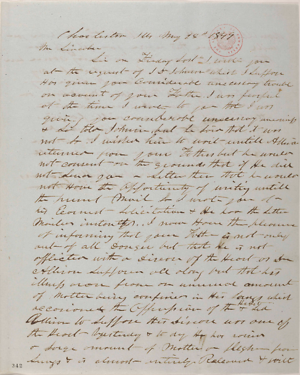 Augustus H. Chapman to Abraham Lincoln, 28 May 18491
Charleston Ills May 28th 1849Mr LincolnSir
on Friday last I wrote you at the request of J D Johnson which I Suppose Has given you Considerable unecessary trouble on acount of your Father. I was fearful at the time I wrote to you that I was giving you considerable unecessary uneasiness & So told Johnsin, but he Said that it was not so. I wished him to woit untill Allison returned from your Fathers but he would not consent on the grounds that if He did not send you a Letter then that he would not Have the Opportunity of writing untill the present Mail So I wrote you of his Earnest Solicitation & He had the letter mailed instantly..2 I now Have the pleasure of informing that your Father is not only out of all Danger but that He is not afflicted with a Disease of the Heart as Dr Allison supposed all along but that his illness arose from an unusual amount of matter being confined in His lungs which occasioned the Oppression of the ^Heart^ & Led Allison to Suppose His Disease was one of the Heart Yesterday & to day He has raised a Large amount of Matter or fleghm from Lungs & is almost entirely Releaved & will
<Page 2>
doubtless be well in a Short time. I hope you will receive this before you get off for this place if you are intending ^to^ come here as I would be very sory indeed for my Last Letter to cause you to Leave any important business that you Might Have on Hands & that required your imediate attention. I hope you will forgive me for writing you as I did without Knowing what I was about & promise for the future to be more carefullHarriett Sends Her love to you all
Respectfully YoursA. H. Chapman
1Augustus H. Chapman wrote and signed this letter.
2John D. Johnston (whose name Chapman misspells) also wrote Abraham Lincoln a letter on May 25, 1849.