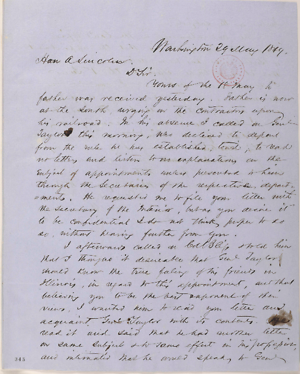 Benjamin E. Green to Abraham Lincoln, 29 May 18491
Washington 29 May 1849,Hon A Lincoln,Dr[Dear] Sir,
Yours of the 18 May to father was received yesterday.2 Father is now at the south, urging on the contractors upon his railroad.3 In his absence I called on Genl Taylor this morning, who declined to depart from the rule he has established, towit, to read no letters and listen to no explanations on the subject of appointments unless presented to him through the Secretaries of the respective departments. He requested me to file your letter with the secretary of the Interior, but as you desire it to be confidential I do not think proper to do so, without hearing further from you.
I afterwards called on Col Bliss & told him that I thought it desireable that Genl[General] Taylor should know the true feeling of his friends in Illinois, in regard to this appointment, and that believing you to be the best exponent of their views, I wanted him to read your letter and acquaint Genl Taylor with its contents.4 He read it and said that he had another letter on same subject & to same effect in his possession, and intimated that he would speak to Genl
<Page 2>
Taylor on the subject.
The understanding in the Land Office, among the Clerks here, is that the appointment of Butterfield has been determined on, and that it is to take effect on the 1st June. I do not know what more I can do in the matter.5 If you have any suggestions write to me, & they will be attended to.
I have some idea of becoming a candidate for the District Attorneyship for this district, and if it is not going too far from home with your influence, would be obliged to you for a letter–6
Please present my kind regards to Mrs L–
Yours trulyBen E Green–
<Page 3>
<Page 4>
WASHINGTON CITY D.C.[District of Columbia]
May 30
10
Hon A. LincolnSpringfieldIllinois–
1Benjamin E. Green wrote and signed this letter.
2This is a reference to a letter Abraham Lincoln wrote to Duff Green May 18, 1849, requesting that Duff Green speak to President Zachary Taylor about appointing someone other than Justin H. Butterfield to the position of commissioner of the U.S. General Land Office. Butterfield, James L. D. Morrison, and Cyrus Edwards were each vying for the job. See the General Land Office Affair.
3In 1849, Duff Green was under contract to help complete the East Tennessee and Georgia Railroad.
N. J. Hammond, Reports of Cases in Law and Equity, in the Supreme Court of Georgia, at Milledgeville (Macon, GA: J. W. Burke, 1869), 37:456-59.
4In his May 18, 1849 letter to Duff Green, Lincoln explained why he believed the people of Illinois would object to Butterfield’s appointment as commissioner of the U.S. General Land Office.
5Lincoln eventually also became a candidate for commissioner, and wrote Duff Green again June 5, 1849 to request his endorsement of him for the position. However, neither Morrison, Edwards, nor Lincoln received the appointment. The job went to Butterfield instead. See the General Land Office Affair.
6Neither Lincoln’s reply to Benjamin E. Green nor a letter of reference from Lincoln on behalf of Benjamin E. Green has been located.