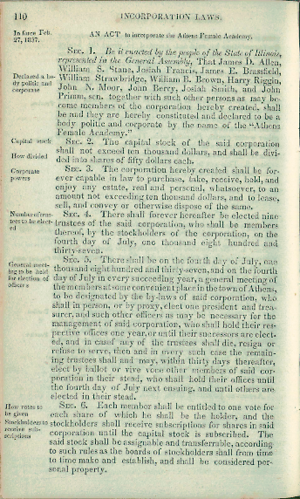 Related Document(s):
A Bill to Incorporate the Athens Female Academy

In force Feb.[February] 27, 1837.
AN ACT to incorporate the Athens Female Academy.
1
Declared a body politic and corporate
Sec.[Section] 1. Be it enacted by the people of the State of Illinois, represented in the General Assembly, That James D. Allen, William S. Stane, Josiah Francis, James E. Brassfield, William Strawbridge, William B. Brown, Harry Riggin, John N. Moor, John Berry, Josiah Smith, and John Primm, sen. together with such other persons as may become members of the corporation hereby created, shall be and they are hereby constituted and declared to be a body politic and corporate by the name of the “Athens Female Academy.”
Capital stock
How divided
Sec. 2. The capital stock of the said corporation shall not exceed ten thousand dollars, and shall be divided into shares of fifty dollars each.
Corporate powers
Sec. 3. The corporation hereby created shall be forever capable in law to purchase, take, receive, hold, and enjoy any estate, real and personal, whatsoever, to an amount not exceeding ten thousand dollars, and to lease, sell, and convey or otherwise dispose of the same.
Number of trustees to be elected
Sec. 4. There shall forever hereafter be elected nine trustees of the said corporation, who shall be members thereof, by the stockholders of the corporation, on the fourth day of July, one thousand eight hundred and thirty-seven.
General meeting to be held for election of officers
Sec. 5. There shall be on the fourth day of July, one thousand eight hundred and thirty-seven, and on the fourth day of July in every succeeding year, a general meeting of the members at some convenient place in the town of Athens, to be designated by the by-laws of said corporation, who shall in person, or by proxy, elect one president and treasurer, and such other officers as may be necessary for the management of said corporation, who shall hold their respective offices one year, or until their successors are elected, and in casef any of the trustees shall die, resign or refuse to serve, then and in every such case the remaining trustees shall and may, within thirty days thereafter, elect by ballot or vive voce other members of said corporation in their stead, who shall hold their offices until the fourth day of July next ensuing, and until others are elected in their stead.
How votes to be given
Stockholders to receive subscriptions
Sec. 6. Each member shall be entitled to one vote for each share of which he shall be the holder, and the stockholders shall receive subscriptions for shares in said corporation until the capital stock is subscribed. The said stock shall be assignable and transferrable, according to such rules as the boards of stockholders shall from time to time make and establish, and shall be considered personal property.
<Page 2>
Corporation not dissolved if fails to elect officers
Sec. 7. In case it should at any time happen that an election of the trustees should not be made on any day, when, pursuant to this act, it should be made, thesaid corporation shall not for that cause or for any nonuser be deemed to be dissolved, but it shall any may be lawful on any other day to hold an election for trustees in such manner as said trustees may deem proper and convenient.
Where to be located
Trustees’ powers
Sec. 8. The said academy shall be located in Athens, in Sangamon county, and the said trustees shall be competent in law and equity to take to themselves and their successors in office, in their corporate name, any estate, real, personal, or mixed, by the gift, grant, bargain, and sale, conveyance, will, devise, or bequest of any person or persons whomsoever; and the same estate, whether real or personal, to grant, bargain, sell, demise, let, place out on interest, or otherwise dispose of for the use of said institution in such manner as may be most beneficial. Said trustees shall faithfully apply all funds collected, or the proceeds, according to their best judgments in erecting suitable buildings, supporting the necessary officers and instructors, and procuring books, maps, charts, globes, philosophical and other apparatus, necessary to the success of said institution.
May be proceeded against by quo warranto
Sec. 9. If at any time the corporation shall act contrary to the provisions of this act, or shall in any manner abuse the powers herein granted, it shall be the duty of the Attorney General to file an information in the nature of a quo warranto for the purpose of vacating and annulling this act, and the powers herein granted.
Approved February 27th, 1837.
1Jesse K. Dubois introduced HB 179 in the House of Representatives on February 8, 1837. On February 18, the House passed the bill. On February 24, the Senate passed the bill. On February 27, the Council of Revision approved the bill, and the act became law.
Illinois House Journal. 1836. 10th G. A., 1st sess., 314, 509, 639, 695, 716, 729, 738; Illinois Senate Journal. 1836. 10th G. A., 1st sess., 463-64, 499, 510-11, 523, 528.