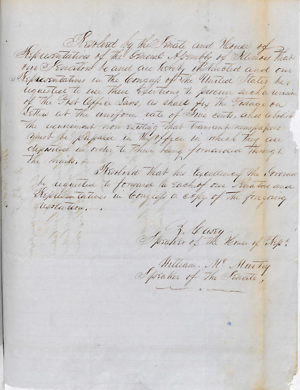 Joint Resolution of Illinois General Assembly to Abraham Lincoln, 19 February 1849 1
Resolved by the Senate and House of Representatives of the General Assembly of Illinois that our Senators be and are hereby instructed and our Representatives in the Congress of the United States be, requested to use their exertions to procure such a revision of the Post Office Laws, as shall fix the Postage on Letters at the uniform rate of Five cents, and abolish the requirement now existing that transient newspapers must be prepaid in the office in which they are deposited in order to their being forwarded through the mails.—
Resolved that his Excellency the Governor be requested to forward to each of our Senators and Representatives in Congress a copy of the foregoing resolution.—.—2
Z. Casey
Speaker of the House of RepsWilliam. McMurtry
Speaker of the Senate,
<Page >
[docketing]
Mis: Doc.[Miscellaneous Documents]
No 53
Postage on letters and Newspapers
[docketing]
Resolutions of the legislature of the State of Illinois relative to postage on letters and Newspapers.
[docketing]
02/19/1849
Feb 19. 1849
laid upon the table and ordered to be printed
[docketing]
[?]
[docketing]
1390
1John P. Richmond introduced this resolution in the Senate on January 3, 1849, and the Senate adopted the resolution on January 5. The House of Representatives concurred on January 9.
Illinois House Journal. 1849. 16th G. A., 36, 56; Illinois Senate Journal. 1849. 16th G. A., 19, 31, 54.
2On January 23, 1849, Sidney Breese introduced this resolution in the U.S. Senate, and the Senate ordered it printed. On February 19, Abraham Lincoln introduced the resolution in the U.S. House of Representatives, and the House tabled it and ordered it printed.
The public flooded Congress with petitions demanding a reduction of and uniformity in postal rates. During Abraham Lincoln’s time in the U.S. House of Representatives, the House referred such petitions to the House Committee on the Post Office and Post Roads, of which Lincoln was a member. Congress and the Post Office Department were slow to respond, but in the middle of the nineteenth century, they began to simplify the complex rate structure. In the Postal Act of 1845, Congress created a rate structure essentially according to weight and distance. For single letters--those weighing a half an ounce or less--conveyed by mail and traveling less than 300 miles, the rate was five cents; for single letters conveyed more than 300 miles, the rate was ten cents. As the weight increased, the rates increased; double letters would be ten cents; triple letters fifteen cents; and so forth. In 1855, Congress reduced the rate to three cents for single letters traveling less than 3,000 miles, and charged ten cents for those traveling a distance further than three thousand miles. Double letters were charged double those rates, triple letters triple, and so forth. Finally, in 1863 Congress set uniform rates based on weight and eliminated all differences based on distance. Congress set the postage for single letters at three cents, with each additional half ounce adding three cents.
Postal authorities labelled newspapers or journals put into the mail by those other than the publishers “transient newspapers.” It was a fairly common practice for people to post local newspapers to friends and relatives, particularly those who had migrated to other parts of the country. Not only did this provide the recipient a source of information without committing to a subscription, it also offered senders an opportunity to evade expensive postal rates for letters by adding personal information to the papers. In 1825, Congress tried to suppress this practice by charging letter postage on papers with personal writing and fining senders for trying to evade the law. The practice continued, nevertheless, throughout the 1830s and 1840s, reaching a crescendo before 1845. Postal rate reductions in 1845 slowed the number of transient newspapers flowing through the mails, and a law in 1847 raised the rates on transient newspapers to three cents, all but ending the practice. Section thirteen of the 1847 law required prepayment for transient newspapers to be forwarded through the mails.
U.S. Senate Journal. 1849. 30th Congress, 2nd Sess., 141; U.S. House Journal. 1849. 30th Congress., 474;“An Act to Reduce the Rates of Postage, to Limit the Use and Correct the Abuse of the Franking Privilege, and for the Prevention of Frauds on the Revenues of the Post Office Department,” 3 March 1845, Statutes at Large of the United States 5 (1856):733; “An Act Further to Amend the Act Entitled ‘An Act to Reduce and Modify the Rates of Postages in the United States, and for Other Purposes,’ Passed March Third, Eighteen Hundred and Fifty-One,” 3 March 1855, Statutes at Large of the United States 10 (1855):641; “An Act to Amend the Laws relating to the Post–Office Department,” 3 March 1863, Statutes at Large of the United States 12 (1863):705; “An Act to Reduce into One the Several Acts Establishing and Regulating the Post-Office Department,” 3 March 1825, Statutes at Large of the United States 4 (1846):105; “An Act to Establish Certain Post Routes and for Other Purposes,” 3 March 1847, Statutes at Large of the United States 9 (1862):202; David M. Henkin, The Postal Age: The Emergence of Modern Communications in Nineteenth-Century America (Chicago: University of Chicago Press, 2006), 43, 47-49.