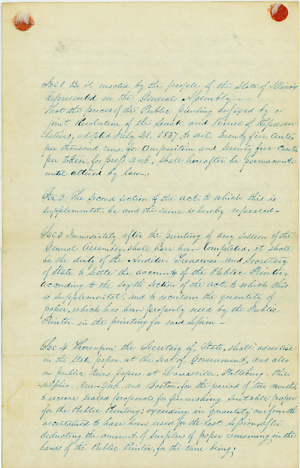 Related Document(s):
An Act Supplemental to “An Act Defining the Duties of Public Printer,” and Fixing the Time and Manner of Performing the Same
Resolution regarding the Amount Paid the Public Printer

Sec[Section] 1 Be it enacted by the people of the state of Illinois represented in the General Assembly. That the prices of the Public printing as fixed by a joint Resolution of the Senate and House of Representatives, adopted July 21, 1837, to wit, seventy five cents, per thousand ems, for composition and seventy five cents, per token, for press work, shall hereafter be permanent, until altered by law.
Sec 2 The second section of the act, to which this is supplemental, be and the same is hereby repealed.
Sec 3 Immediately after the printing of any session of the General Assembly, shall have been Completed, it shall be the duty of the Auditor, Treasurer[,] and Secretary of State, to settle the accounts of the Public Printer, according to the sixth section of the act, to which this is supplemental, and to ascertain the quantity of paper, which has been properly used by the Public Printer, in the printing for said session.
Sec 4 Thereupon the Secretary of State, shall advertise in the State paper, at the seat of Government, and also in Public news-papers, at Louisville, Pittsburg, Philadelphia, New-York, and Boston, for the period of two months, to receive sealed proposals, for furnishing suitable paper for the Public Printing; exceeding in quantity one fourth ascertained to have been used for the last Session, after deducting the amount of surplus of paper remaining in the hands of the Public Printer, for the time being.
<Page 2>
Sec 5 At the close of the period for said advertisement, the Secretary of State, shall in the presence of the Auditor and Treasurer, open all the proposals he may have received, and thereupon, shall accept the proposal of the lowest responsible bidder, and immediately notify such bidder of such acceptance.
Sec 6 The Secretary of State shall file all such proposals in his office
Sec 7 The Public Printer shall give bond to the Governor, with good security, previous to entering upon the discharge of the duties of his office, in the penalty of Ten thousand dollars, conditioned, that he will faithfully perform and execute all the public printing required to be done in pursuance of Law, by the direction of either branch of the General Assembly, or any officer of the State, and that he will do and perform all other acts, and things required, or which may hereafter be required of him according to law; which said bond shall be approved by the Governor and filed in the office of Secretary of State.
Sec 8 The person receiving the contract for furnishing paper, for the use of the State, shall at the time of the execution of such contract, give bond to the Governor in the penalty of Ten thousand dollars, conditioned, that he will faithfully furnish and deliver the said papers, in Kind, quality and quantity, at the times, places, and upon the terms mentioned in said contract, and that he will in all respects comply faithfully, with the provisions of such contract, and of the Law, by virtue of which such contract, shall have been made, which said bond shall be approved, by the Secretary of State, Auditor [,]
<Page 3>
and Treasurer, and filed in the office of Secretary of State.
Sec 9 Upon the delivery of the paper in pursuance of and according to such contract, the Auditor with the concurrence of the Secretary of State, and Treasurer, shall draw his Warrant, in favor of such Contractor, for such sum of money, as he shall be entitled to therefor.
Sec 10 The Public Printer, shall within the first week, of each session, Report to the Legislature, the amount of work, done by him; the nature of said work, the amount of money received therefor, and the amount and quality of paper used by him as Public Printer, since the commencement of the preceding Session of the General Assembly.
[certification]
02/11/1841
Calhoun, John
Passed by theHouse of Rep
Feby 11th 1841
John Calhoun
Clk [Clerk] of H of R
<Page 4>
[docketing]
No 66 House
[docketing]
A Bill for an act supplemental to an act defining the duties of Public Printer, and fixing the time and manner of performing the same
[docketing]
[02]/[12]/[1841]
2
[docketing]
[02]/[17]/[1841]
3
[docketing]
[02]/[12]/[1841]
Penitentiary
[docketing]
[02]/[17]/[1841]
as amended
[docketing]
[02]/[20]/[1841]
H. con[concurred] in
[docketing]
[01]/[22]/[1841]
Engrossed
[docketing]
22
[docketing]
1
[docketing]
24
[docketing]
3
[docketing]
passed.

A Bill Supplemental to "An Act Defining the Duties of Public Printer," and Fixing the Time and Manner of Performing the Same. [1841-02-11]. /documents/D284110. The Papers of Abraham Lincoln Digital Library.