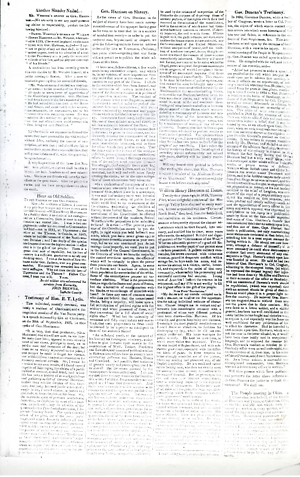 John Brewer to the Editors of The Old Soldier, March 1840
To the Editors of the Old Soldier: Sirs—
As a citizen of Illinois, I conceive it my privilege to make my views known as to the Old General—William Henry Harrison.— As a Soldier there is no doubt of his courage—and as a Commander, there is none in my estimation can exceed him. I was in two engagements under his command as Commander-in-Chief—one in 1811, at Tippecanoe; the other at the Thames, in Canada, in 1813, where he had the command of the North-western Division; and I am firmly of the opinion his firmness deserves the highest station in office that is in the gift of the people. There is a great deal said of capability, but his love of country is a sufficient guarantee to satisfy any thinking mind. I was at the battle of New Orleans under Gen. Jackson, who is a great commander. His country has rewarded him with their suffrages. Why not then the old hero of Tippecanoe and the Thámes? Fellow Citizens, I trust you will.1
Yours.
An old soldier who volunteered his services from Kentucky,JOHN BREWER,
LaSalle County.
1Brewer was endorsing Harrison for president in the 1840 presidential election.