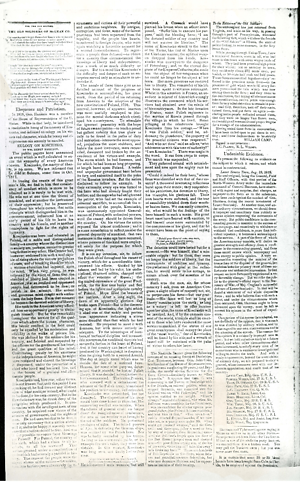 William Camp to the Editors of The Old Soldier, March 1840
To the Editors of the Old Soldier:
The undersigned has just returned from Virginia, and while on his way, in passing through a part of Pennsylvania, witnessed the following fact, which will show the friends of the “Old Soldier” in Illinois, the state of public feeling, in some measure, in the Key Stone State.
While passing through Union-Town, I saw a number of farmers, seven in all, who had come to that town with seven wagon loads of wheat. They had been promised high prices for their wheat; but on arriving in town, they could only obtain 37½ cents cash, per bushel, or 50 cents half cash and half goods. These farmers consulted together—they referred to the promises made them—to the promises of gold which was to fill every farmers purse—and the ruin which was now staring them in the face; and they came to the conclusion, that taking all circumstances into consideration, twelve years was enough time for any administration to remain in power: and they, therefore, took off their coats, turned them, and put them on again;—declaring to the people collected around them, that they were no longer Van Buren men, and would go all reasonable and proper lengths for a change of the administration.1
Having stated these facts in conversation, I have been called upon to put them in writing; and I now declare them to be strictly true.
WILLIAM CAMP.
[certification]
Wilson, Robert L.Planck, Jacob C.
Signed in our presence:
J. C. Planck,R. L. Wilson.
1Depressed farm prices was one of the residual effects of the Panic of 1837, which plagued Van Buren throughout his presidency.