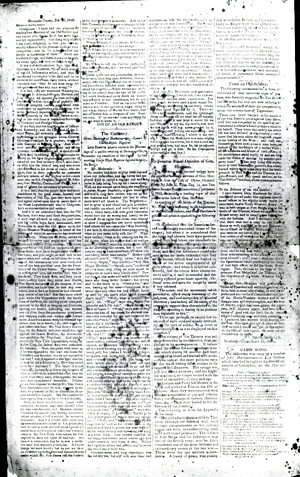 Thomas Morgan to the Editors of The Old Soldier, 15 March 1840
To the Editors of the Old Soldier:
I have known Gen. Harrison for thirty years, and served under him eighteen months as an officer in the regular army under his command, in the North-Western Army. I was in both seiges at Fort Meigs, also at the battle of the Thames, where we captured the British army, and in many other difficulties with the Indians. And I seriously believe that there was not a man in the United States as well qualified to be our Commander-in-Chief as Wm. H. Harrison. I further state on my honor, that I never saw the first evidence of cowardice in Gen. Harrison, nor do I believe any other man e[ve]r did, if he will speak the [t]ruth of th[?] hero.
Gen. Harrison was born to fill civil offices also; and he has had many, and has filled them with advantage to the country and honor to himself; and I trust I shall see him in the Presidential chair, performing the duties of that high office, as did the Great Washington. Now, success to the hero of Tippecanoe, Fort Meigs and the Thames, and the Guardian of the whole Western Country!
I hope Gen. Harrison will perform the duties of President and settle our national affairs, both at home and abroad, as well as he performed the duties of Commander-in-Chief of the North-Western Army; and if he does, no man will dare complain, and the tree of liberty, which has been dying for years past, will blossom again, and bear abundance of good and ripe fruit, for the use of all good meaning men and their posterity.
I received four wounds while serving under Gen. Harrison, and which have so disabled me that I could not get to Springfield on the 14th of his month, to meet my old companions in arms.1
THO’S. MORGAN.Salisbury, Illinois. March 15, 1840.
1For proceedings of this meeting, see the Sangamo Journal (Springfield, IL), 20 March 1840, 2:5-6.