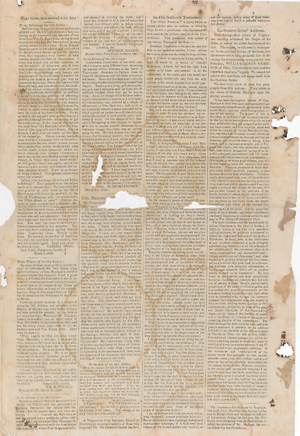 Stephen Rigdon to the Editors of The Old Soldier, 1 March 1840
To the Editors of the Old Soldier:
Sometime since I obtained ten subscribers for the Old Soldier, and the postmaster at Marietta forwarded the money and the names; but the papers have not been received. - - - I am an old, frail man—had determined not to meddle in politics any more; but I served under Gen. Harrison in 1812 and '13[1813]; marched with the first troops that marched to where Fort Meigs was built, and assisted in erecting the same; and I know the General to be a man of undoubted bravery and military skill, in whom unlimited confidence was placed, by both officers and men, and if my life is spared I will exert all the influence I have to aid the election of the General. I could tell many anecdotes of the late war, of which I was an eye witness. I reserve them for the proper time.
I remain, &c[etc].STEPHEN RIGDON.Pleasant Valley, Fulton County, 1st March, 1840.