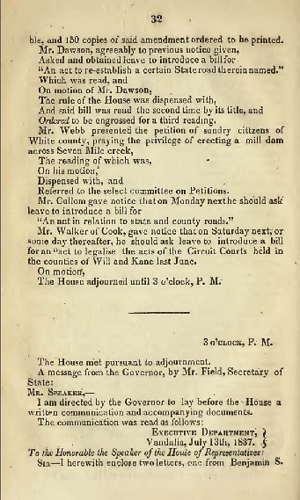 1Executive Department,
Vandalia, July 13th, 1837.To the Honorable the Speaker of the House of Representatives:Sir—
I herewith enclose two letters, one from Benjamin S.
<Page 2>
Enloe, Warden; and the other from the Inspectors of the Penitentiary, concerning the official conduct of the former.
I consider it also my duty to inform the legislature that said Enloe was elected Warden of the Penitentiary on the 16th day of January, was commissioned on the 4th day of February, and on the 4th day of March his salary was increased from 6 to 8 hundred dollars per annum, which in my opinion was a violation of the 19th section of the 2d article of the Constitution, which provides that “no Senator or Representative shall, during the time for which he shall have been elected, be appointed to any civil office in this State, which shall have been increased during such time.”2 The Judge of the 5th Judicial Circuit was also a member of the Legislature at the time of his election to that office, and as his salary was increased in violation of the above recited article of the Constitution, I present his also, as one worthy of your consideration.3
I have the honor to be, Sir, Your obedient servant,JOSEPH DUNCAN.
1On July 13, 1837, the House of Representatives received this message from Governor Joseph Duncan. The House referred the message to the Committee on the Penitentiary, of which Abraham Lincoln was a member. On July 18, the House received a communication from the Inspectors of the Penitentiary relative to the conduct of the Warden, Benjamin S. Enloe, and the House referred that letter to the Committee on the Penitentiary as well. On July 18, the Committee on the Penitentiary presented a bill on the subject in the House.
Illinois House Journal. 1837. 10th G. A., special sess., 32-33, 106-07, 113-14.
2On January 16, 1837, the General Assembly elected Benjamin Enloe as warden of the Illinois State Penitentiary at Alton. Enloe began his duties on March 4, the same day the General Assembly passed an act increasing the warden’s salary from $600 to $800 annually. In July 1837, Governor Joseph Duncan reported to the House of Representatives that in his opinion, the increase in Enloe’s salary was unconstitutional because Enloe was a sitting member of the General Assembly when the increase was approved. Eight days later, the General Assembly passed an act abolishing the position of warden, transferring the warden’s authority and responsibilities in the Inspectors of the Penitentiary. Enloe only held the position of warden from March 4 to July 21, 1837, yet he claimed the state owed him the balance of the salary for the two-year term to which he was elected. In December 1838, Enloe brought suit in the Illinois Supreme Court in an attempt to compel the Auditor to pay him the remainder of his salary. The Court disagreed and refused to compel the Auditor to pay any further money to Enloe. In January 1839, the General Assembly passed an act directing the Auditor to pay $200 to Enloe as the remainder of his salary.
Illinois House Journal. 1836. 10th G. A., 1st sess., 276-79; People ex rel. Enloe v. Auditor of Public Accounts, 2 Ill. (1 Scammon) (1838) 536-38.
3On January 9, 1837, Governor Joseph Duncan reported to the General Assembly the resignation of Richard M. Young as Judge of Illinois’ Fifth Judicial Circuit., which at the time consisted of Adams, Fulton, Hancock, Knox, McDonough, Pike, Schuyler, and Warren counties in the western part of the state. On January 14, the two houses of the legislature elected as replacement James H. Ralston, who was at that point a sitting Representative from Adams County. Ralston continued to serve as Representative until officially resigning on February 4. Ralston served as Judge of the Fifth Judicial Circuit until 1839, when he resigned.
Illinois House Journal. 1836. 10th G. A., 1st sess., 227, 260, 506-07; Illinois House Journal. 1839. 11th G. A., special sess., 50; An Act Dividing the State into Judicial Circuits.


Printed Transcription, 2 page(s), Journal of the House of Representatives of the Tenth General Assembly of the State of Illinois, at a Special Session (Vandalia, IL: William Walters, 1837), 32-33