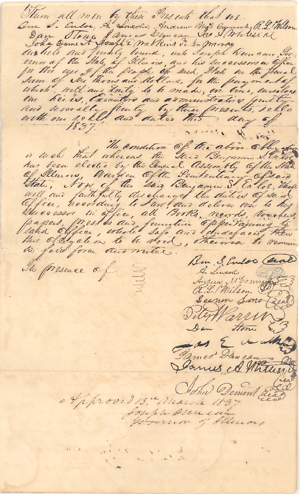 Bond for Benjamin S. Enloe as Warden of State Penitentiary, [13 March] 18371
Know all men by these Presents that weBen S. Enloe, A. Lincoln, Andrew McCormick, R. L. Wilson Dan Stone James Duncan Jas A Whiteside John Dement Joseph E Watkins Peter Warrenare held and firmly bound, unto Joseph Duncan, Governor of the State of Illinois, and his successors in Office for the use of the people of said state in the penal sum of Ten thousand dollars, for the payment of which, well and truly to be made, we bind, ourselves, our heirs, Executors and administrators jointly and severally firmly by these presents, seald with our seals, and dated thisday of1837.
The condition of the above obligation is such that whereas the said Benjamin. S. Enloe has been elected by the General Assembly of the State of Illinois, Warden of the Penitentiary of said State, Now if the said Benjamin. S. Enloe, shall well and faithfully discharge the duties of said Office, according to Law, and deliver over to his successor in office, all Books, records, Vouchers, papers, presses and furniture appertaining to said Office, whole safe and undefaced, then this obligation to be void, otherwise to remain in full force and virtue.2
In presence of
Ben. S. Enloe
seal  A. Lincoln
seal Andrew McCormick
seal R. L. Wilson
seal [Leavon?] Lane
seal Peter Warren
seal Dan Stone
seal Jos E Watkins
seal James Duncan
seal James A Whiteside
seal John Dement
seal
[endorsement]
03/13/1837
Duncan, Joseph
Approved 13th March 1837
Joseph Duncan
Governor of Illinois
<Page 2>
[docketing]
1837
[docketing]
(5)
[docketing]
Warden of the Penitentiary
[docketing]
E
1Abraham Lincoln did not write the bond; however, he filled in his own name as well as that of Andrew McCormick in the first paragraph. Lincoln also signed his own name.
2On January 16, 1837, the General Assembly elected Benjamin Enloe as warden of the Illinois State Penitentiary at Alton. Enloe began his duties on March 6, two days previous, the General Assembly passed an act increasing the warden’s salary from $600 to $800 annually. In July 1837, governor Joseph Duncan reported to the Illinois House of Representatives that in his opinion, the increase in Enloe’s salary was unconstitutional because Enloe was a sitting member of the General Assembly when the increase was approved. Eight days later, the General Assembly passed an act abolishing the position of warden, transferring the warden’s authority and responsibilities in the Inspectors of the Penitentiary. Enloe only held the position of warden from March 6 to July 21, 1837, yet he claimed the state owed him the balance of the salary for the two-year term to which he was elected. In December 1838, Enloe brought suit in the Illinois Supreme Court in an attempt to compel the Auditor to pay him the remainder of his salary. The Court disagreed and refused to compel the Auditor to pay any further money to Enloe. In January 1839, the General Assembly passed an act directing the Auditor to pay $200 to Enloe as the remainder of his salary.
Illinois House Journal. 1836. 10th G. A., 1st sess., 276-79; People ex rel. Enloe v. Auditor of Public Accounts, 2 Ill. (1 Scammon) (1838) 537-38.