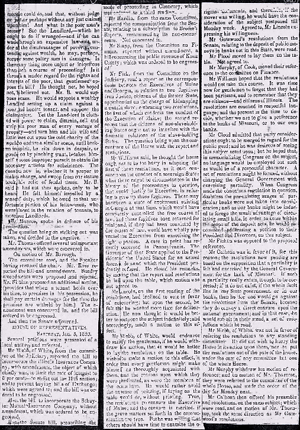 Summary of Legislative Debate on Resolutions in Relation to Fugitives, 5 January 18391
Mr Fisk, from the Committee on the Judiciary, read a report on the correspondence between the Executives of Maine and Georgia, in relation to two fugitives from Justice, citizens of the former State, apprehended on the charge of kidnapping a certain slave; embracing two resolutions, the f[i]rst of which condems the conduct of the Executive of Maine; the second resolves that the citizens of non-slaveholding States ought not to interfere with the domestic relations of the slave-holding States. The question being upon the concurrence of the House with the report and resolutions.2
Mr Williams said, he thought the house ought not to be too hasty in adopting the first of these resolutions, as it cast censure upon the conduct of a sovereign State; wher there might be circumstances in the history of the proceedings in question, that would justify its Executive, in refusing to give up those fugitives. There may have been a state of excitement existing in Georgia at that time, which would have competely controlled the free course of law, had those fugitives been returned for trials; and, if they had been convicted by due course of law, would have wholly prevented the Executive from exercising the right to pardon. A case in point has recently occurred in Pennsylvania. The Governor of that State applied to the President of the United States for an armed force, a demand which the President prudently refused. He closed his remarks, by moving that the report and resolutions be laid upon the table, which motion was not agreed to.
Mr Lincoln, on the first reading of the resolutions, had inclined to vote in favor of concurring; but upon the second, he falt[felt] that he wanted more time for deliberation. He now thought it would be better to postpone the subject indefinitely; and accordingly, made a motion to this effect.
Mr Webb, of White, would endeavor to satisfy the gentleman, if he would withdraw his motion, that it would be better to lay the resolutions on the table. He wished to make a motion to this effect, in order that every gentleman might make himself as thoroughly acquainted with them, and the reasons upon which they were predicated, as were the members of the committee. He would rather avoid the expense of printing, if laying on the table would do, without printing. True, the resolutions [d]o censure the Executive of Maine; and the censure is merited, if the grave matters set forth in the communication are true. But he was willing that others should have time to examine the original documents, and therefore, if the mover was willing, he would have the consideration of the subject postponed till Monday week. Agreed to, Mr Lincoln expressing his willingness.3
1In May 1837, a slave named Atticus left Savannah, Georgia, on board a ship headed for Maine. Atticus’s owners pursued him, eventually capturing him in Maine and returning him to Georgia. They later charged the ship’s captain and first mate with “felonious abduction of human property.” Two successive governors of Maine refused, for various reasons, to extradite the captain and mate, which spurred the legislatures of the states into a years-long quarrel that eventually made its way to Congress.
Niles' National Register (Philadelphia, PA), 2 February 1839, 2:2; Stanley Harrold, Border War: Fighting over Slavery before the Civil War (Chapel Hill: University of North Carolina Press, 2010), 77.
On December 12, 1838, Governor Thomas Carlin presented to the Illinois House of Representatives resolutions from the legislatures of Georgia and Alabama relating to the Governor of Maine’s refusal to surrender Daniel Philbrook and Edward Kelleram as fugitives from justice. The House referred the resolutions to the Committee on the Judiciary. On January 5, the Committee reported back.
Illinois House Journal. 1838. 11th G. A., 1st sess., 62, 170-71.
2The report of the Committee on the Judiciary began with the assertion of slaveholding as a constitutional privilege and denounced any attempt by free states to interfere with the rights of slaveholders. The first resolution stated, “That we consider the refusal of the Executive of any state to deliver up...any person who may be charged with the commission of a crime...not only as dangerous to the rights of the people of the United States in general, but clearly and directly in violation of the plain letter of the Constitution of the United States.” The second resolution stated that “a free State or its citizens ought not to interfere with the property of slaveholding States; which property has been guarantied unto them by the Constitution of the United States.”
Illinois House Journal. 1838. 11th G. A., 1st sess., 170-71.
3The House postponed consideration of the resolutions until the week of January 14; however, it does not seem the resolutions were ever brought up again.
Illinois House Journal. 1838. 11th G. A., 1st sess., 171.

Summary of Legislative Debate on Resolutions in Relation to Fugitives. [1839-01-05]. /documents/D200149. The Papers of Abraham Lincoln Digital Library.