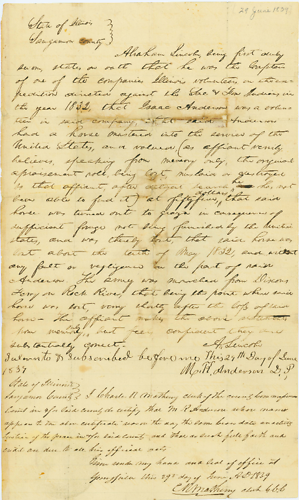 Affidavit of Abraham Lincoln, 29 June 18391
Abraham Lincoln, being first duly sworn, states on oath that he was the Captain of one of the companies Illinois volunteers, on the expedition directed against the Sac & Fox Indians in the year 1832, that Isaac Anderson was a volunteer in said company, that said Anderson had a horse mustered into the service of the United States, and valued, (as affiant verrily believes, speaking from memory only; the original apraisement roll, being lost, mislaid or destroyed so that affiant, after diligent search ^he^ [...?] has not been able to find it) at fiftyfive, ^dollars^ that said horse was turned out to graze in consequence of sufficient forage not being furnished by the United states, and was thereby lost, that said horse was lost about the tenth of May 1832, and without any fault or negligence on the part of said Anderson. The army was marched from Dixons Ferry on Rock River, that being the point where said horse was lost, verry shortly after the loss of said horse— The affiant makes the above statements from memory, ^only^ but feels confident they are substantially correct—2
A. Lincoln
[certification]
06/29/1839
Anderson, Moses K.
Sworn to & Subscribed before me This 29th Day of June 1839M. K. Anderson J. P,[Justice of the Peace]
[certification]
06/29/1839
Matheny, Charles R.
I Charles R Matheny clerk of the county Commissioners Court in & for said county do certify that M K Anderson whose name appears to the above certificate was on the day the same bears date an acting Justice of the peace in & for said county and that as such full faith and credit are due to all his official acts
Given under my hand and seal of office at springfield this 29th day of June AD[anno domini] 1839
C R Matheny clerk C. C. C
1Abraham Lincoln wrote the affidavit in its entirety, including his signature. Moses K. Anderson and Charles R. Matheny penned the two certifications, respectively.
2Anderson was seeking compensation from the United States government for his loss, but the law was not on his side. In February 1833 and December 1834, Congress passed laws compensating volunteers for horses or arms lost in the war. These laws only allowed pay for horses killed in battle or dying for want of forage; and by the interpretation of Peter Hagner, 3rd Auditor of the United States, even these could not be paid for unless the owner was himself in the public service at the time of the loss. In December 1836, the General Assembly had passed a joint resolution urging Congress to pass an additional law compensating Illinoisans for property losses incurred during the war. One class of claims highlighted in the resolution was those of volunteers who lost horses or other equipment. The General Assembly protested against the current laws and the interpretation of the Hagner. Congress took no action on the joint resolution, and it is uncertain whether Anderson ever received compensation for his loss.
Lincoln wrote affidavit for Anderson, Martha L. Benner and Cullom Davis et al., eds., The Law Practice of Abraham Lincoln: Complete Documentary Edition, 2d edition (Springfield: Illinois Historic Preservation Agency, 2009), http://www.lawpracticeofabrahamlincoln.org/Details.aspx?case=141166; “An Act for Payment of Horses and Arms Lost in the Military Service of the United States Against the Indians on the Frontiers of Illinois and Michigan Territory,” 19 February 1833, Statutes at Large of the United States 4 (1846):613; “An Act to Provide for the Payment of Claims, for Property Lost, Captured, or Destroyed, by the Enemy, While in the Service of the United States, During the Late War with the Indians on the Frontiers of Illinois and the Michigan Territory,” 30 June 1834, Statutes at Large of the United States 4 (1846):726-27; “Claims for Horses Lost in the Indian War in Illinois, &c.,” Doc. No. 135, 24th Congress, 1st Sess., 1-16.