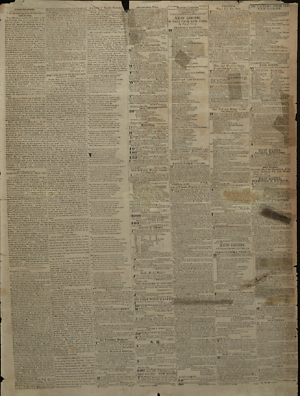 Summary of Speech at Springfield, Illinois, 18 December 1839
On Wednesday evening, after many efforts on the part of the Locos to get off, the debate was opened on the part of the Whigs, by a speech from Mr. Lincoln, characterized by that great force and point for which he is so justly admired. He set out with a statement of three propositions, which he believed he could demonstrate to the satisfaction of every unprejudiced mind in the house. 1st, That there had been a total change in the administration of the Government, within the last ten years; and that change had been for the worse. 2d. That a new and corrupt system of tactics had been [introduced into the]1 National administration, unknown to former administrations: and thirdly, that the consummation and perfection of this whole scheme of fraud and corruption, was in the establishment of the Sub-Treasuyry. These several propositions he sustained, not by rant, declamation and assertion, but by an array of documentary evidence, which could not be disputed.2
1The original source text is creased and therefore illegible. The supplied text comes from the transcription in The Collected Works of Abraham Lincoln.
Roy P. Basler, The Collected Works of Abraham Lincoln (New Brunswick, NJ: Rutgers University Press, 1953), 1:158.
2In November and December 1839, Abraham Lincoln helped organize a series of debates in Springfield between the Democrats and Whigs in anticipate of the upcoming presidential election. Lincoln, Cyrus Walker, and Edward D. Baker carried the Whig standard; Stephen A. Douglas, John Calhoun, Josiah Lamborn, and Edmund R. Wiley spoke on behalf of the Democrats. The first debate occurred on November 19, coinciding with a session of the Sangamon County Circuit Court, which brought many politicians of both parties to Springfield. Debates occurred nightly for one week. Lincoln closed the debate on November 19, and the next night, Lincoln and Douglas debated the Bank of the United States. After the Whig National Convention nominated William Henry Harrison for president, Lincoln took charge of Harrison’s campaign in Illinois. Coinciding with the Whig National Convention, politicians gathered for a special session of the General Assembly.
After a brief hiatus, the debates resumed during the week of Christmas. After Lincoln spoke on December 18, Douglas offered a rebuttal, which Baker answered. Lincoln culminated his attack on the Sub-Treasury with a speech on December 26.
Illinois State Register (Springfield), 23 November 1839, 2:2; 30 November 1839, 2:3; Sangamo Journal (Springfield, IL), 22 November 1839, 2:4, 3 January 1840, 4:1-2; Paul M. Angle, “Four Lincoln Firsts” [Separate from the Papers of the Bibliographical Society of America] 36 (First Quarter, 1942), 1-4; Michael Burlingame, Abraham Lincoln: A Life (Baltimore, MD: The Johns Hopkins University Press, 2008), 1:149-50.