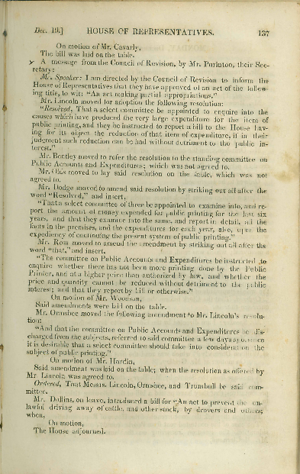 Resolution regarding the Reduction of Public Printing Expenditures, 19 December 18401
Resolved, That a select committee be appointed to enquire into the causes which have produced the very large expenditure for the item of public printing, and they be instructed to report a bill to the House having for its object the reduction of that item of expenditure, if in their judgment such reduction can be had without detriment to the public interest.2
1Abraham Lincoln introduced the resolution in the House of Representatives on December 19, 1840, and the House, after much debate and failed efforts to table or amend the resolution, adopted it. The House appointed Lincoln, Lyman Trumbull, and Joseph W. Ormsbee a select committee to investigate the matter. On January 16, 1841, the select committee issued its report, and introduced HB 120 and HB 121.
Illinois House Journal. 1840. 12th G. A., 137, 235.
2In January 1835, the General Assembly passed an act defining the duties of the public printer, fixing the time and manner of performing printing for the state, setting prices for various publications, and establishing a procedure for choosing a public printer. Section one stipulated that the House of Representatives and Senate would select the public printer by joint ballot at the beginning of each session. As party divisions solidified and hardened, partisanship came to the fore in these elections, enabling the majority party to hold sway in these contests. During Lincoln’s time in the House, the public printers were John Y. Sawyer (1835-36), founder, editor, and publisher of the solidly Democratic-Republican Illinois Advocate; and William Walters (1837-1841), editor and publisher of the Illinois State Register, successor of the Advocate and also strongly Democratic. Lincoln voted for other candidates in each of the four elections in which he cast a ballot. He had particular animus toward Walters and clamored to replace him, as evidenced by his impassioned letter to Andrew McCormick in January 1839, in which he castigated McCormick for voting for Walters. Lincoln proposed this resolution in part to embarrass Walters and help his friend Simeon Francis, editor of the Whig-leaning Sangamo Journal, in the upcoming election for public printer.
There was also growing dissatisfaction in the House over the cost associated with public printing, particularly during straitened economic conditions accompanying the Panic of 1837. In defending his resolution, Lincoln cited Governor David Wallace’s message of December 8, 1840, to the Indiana General Assembly where he bemoaned the “heavy and unnecessary” expenditure of $12,457.81 for public printing. Illinois, on the other hand, with half the population, had expended $23,000 for the same service over a similar time period.
This exorbitant cost prompted some to question the method of choosing the public printer and contracting for public printing. On December 16, 1840, the House adopted a resolution instructing the Committee on Public Accounts and Expenditures to investigate the feasibility of scrapping the current system and creating a competitive bidding process for public printing, with the lowest bid receiving the contract.
Franklin W. Scott, "Newspapers and Periodicals of Illinois, 1814-1879" (PhD diss., University of Illinois, 1910), 167, 322, 341, 342; Illinois House Journal. 1835. 9th G. A., 1st sess., 293-94; Illinois House Journal. 1836. 10th G. A., 1st sess., 275-76; Illinois House Journal. 1838. 11th G. A., 1st sess., 211; Illinois House Journal. 1840. 12th G. A., 124, 273; Paul Simon, Lincoln’s Preparation for Greatness: The Illinois Legislative Years (Urbana: University of Illinois Press, 1971), 242; Summary of Legislative Debate on Expenditures for Public Printing; Dorothy Riker, ed., Messages and Papers Relating to the Administration of David Wallace Governor of Indiana 1837-1840 (Indianapolis: Indiana Historical Bureau, 1963), 455; “Report of the Auditor of Public Accounts of the State of Illinois, Transmitted to Both Houses of the General Assembly,” 10 December 1840, Reports Made to the Senate and House of Representatives, of the State of Illinois (1841), [70]:6.