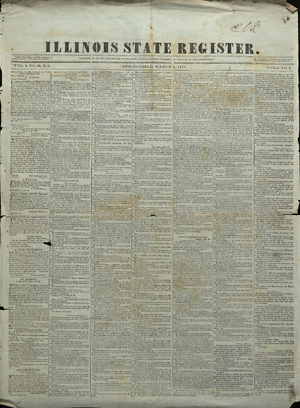 Summary of Legislative Debate on Bill for Relief of William Dormody, 19 February 1841
The bill for the relief of Wm. Dormady coming up on its passage,1
Mr MURPHY, of Cook, read an affidavit stating the circumstances of the fire, by which the Notes were burned, as also a certificate signed by several highly respectable inhabitants of Springfield, as to the good character and standing of the petitioner.
Mr LINCOLN explained a curious experiment which he said had been tried in the presence of a Jury: a pocket book filled with blank bills had been exposed to the action of fire, and the bills had not been burnt, which same bills afterwards burnt freely when subjected to the flame of a candle, hence a jury had concluded, and Mr L. also believed that the notes could not have been burnt in the manner stated in the affidavit. (The affidavit stated that the notes had, together with the pocket book been carbonized, not inflamed, and that on handling them they had crumbled to pieces.)
Mr DOUGHERTY opposed the bill on the ground that W. Dormady should stand by the judgment of his peers.
Mr KITCHELL spoke in support of the bill and urged that as part of the burnt bills had been shewn to the Bank and recognized to be their bills, they were bound to make them good.2 The Bank at Louisville had given new notes for those of that bank which had been burnt at the same time, without making any difficulty about it, it was the custom and practice in all such cases and ought to have been followed by the Bank of Springfield. Mr K. was guided in his opinion of this case by the report of the learned and able Judge before whom the action against the bank had been brought by W. Dormady, and from his report he believed that as a common act of justice this bill in favor of W. Dormady ought to pass.3
Mr PECK, shewed that the bill proposed simply for the State to pay only her proportion as a shareholder in the Bank, of the notes which had been burnt, while the individual would still be left unsatisfied for what was due to him from the bank. He hoped as an act of honesty and justice on the part of the State, the bill would pass.
The question was then taken, and the House refused to pass the bill, by yeas 30, nays 45.4 So the bill died.
1The following debate was a continuation of a debate from December 21, 1840.
On June 6, 1839, a fire in Dormody’s house allegedly damaged six, $100 State Bank of Illinois notes. When the bank refused to reissue the paper, Dormody sued the bank in Sangamon County Circuit Court. After he lost the case on appeal to the Illinois Supreme Court in June 1840, he turned to the General Assembly for remittance. On December 16, 1840, Richard Murphy in the House of Representatives presented a petition of Dormody, which the House referred to a select committee that reported back the bill on December 21. After a lenghty debate that included a statement from Abraham Lincoln, the House referred the bill to the Committee on the Judiciary. The Committee on the Judiciary reported back the bill on February 15, 1841, recommending its rejection.
Dormody v. State Bank of Illinois, Martha L. Benner and Cullom Davis et al., eds. The Law Practice of Abraham Lincoln: Complete Documentary Edition, 2d edition (Springfield: Illinois Historic Preservation Agency, 2009), http://www.lawpracticeofabrahamlincoln.org/Details.aspx?case=138806; Illinois House Journal. 1840. 12th G. A., 122, 138, 399, 417, 444-45.
2The “M” in “Mr” appears to be italicized, but the editors concluded that its was a printing mistake. We regulated the letter.
3Dormody v. State Bank of Illinois, Martha L. Benner and Cullom Davis et al., eds. The Law Practice of Abraham Lincoln: Complete Documentary Edition, http://www.lawpracticeofabrahamlincoln.org/Details.aspx?case=138807.
4Lincoln voted nay.
Illinois House Journal. 1840. 12th G. A., 444-45.