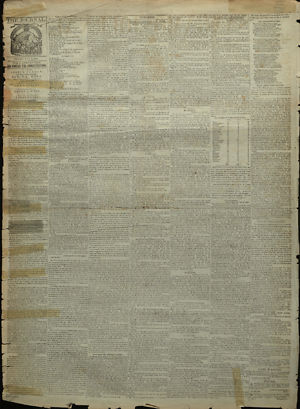 Benjamin S. Edwards and Abraham Lincoln to the Editor of the Sangamo Journal, 25 June 18411
It having been charged in some of the public prints, that Harry Wilton, late United States Marshal for the District of Illinois, had used his office for political effect, in the appointment of Deputies for the taking of the census for the year 1840, we, the undersigned, were called upon by Mr. Wilton to examine the papers in his possession relative to these appointments, and to ascertain therefrom the correctness or incorrectness of such charge.2 We accompanied Mr. Wilton to a room, and examined the matter as fully as we could with the means afforded us. The only sources of information, bearing on the subject, which were submitted to us, were the letters, &c.[etc.] recommending and opposing the various appointments made, and Mr. Wilton’s verbal statements concerning the same. From these letters, &c., it appears that in some instances appointments were made in accordance with the recommendations of leading whigs, and in opposition to those of leading democrats; among which instances, the appointments in Scott, Wayne, Madison and Lawrence are the strongest. According to Mr. Wilton’s statement, of the 76 appointments we examined, 54 were of democrats, 11 of whigs, and 11 of unknown politics.
The chief ground of complaint against Mr. Wilton, as we had understood it, was because of his appointment of so many democratic candidates for the legislature; thus giving them a decided advantage over their whig opponents—and consequently our attention was directed rather particularly to that point. We found that there were many such appointments, among which were those in Tazewell, McLean, Iriquois, Coles, Menard, Wayne, Washington, Fayette, &c.; and we did not learn that there was one instance in which a whig candidate for the legislature had been appointed. There was no written evidence before us, showing us at what time those appointments were made; but Mr. Wilton stated that they all, with one exception, were made before those appointed became candidates for the legislature; and the letters, &c. recommending them all bear date before, and most of them long before those appointed were publicly announced as candidates.
We give the foregoing naked facts, and draw no conclusions from them.3
BENJ. S. EDWARDS,A. LINCOLN.June 25, 1841.
1The only version of this letter that is extant is that which was printed in the Sangamo Journal on July 2.
2Wilton, a Democrat, was removed from his position by incoming Whig president William Henry Harrison in April 1841. In December 1840, the Springfield Whig newspaper, the Sangamo Journal, had accused Wilton of having used his federal office for political purposes. In May 1841, following his removal, the Sangamo Journal repeated the accusation, specifying that Wilton had appointed as census-takers an inordinate number of men who were at that time, or who would soon become, Democratic candidates for the Illinois General Assembly, thus allowing Democratic candidates to receive payment by the federal government while canvassing their prospective voters. On June 10, Wilton responded to the Journal, denouncing the accusations and offering up his records for inspection by a committee of Whigs.
Sangamo Journal (Springfield, IL), 11 December 1840, 2:2; 7 May 1841, 2:3; 18 June 1841, 2:3.
3Directly following this letter, Edwards added a personal endorsement stating “I am convinced that in no case has he used the office of Marshal for party or political purposes....That many such appointments were made is true; but that Mr. W. made them with the intent and for the purpose charged, is not, in my opinion, the case.”
Sangamo Journal (Springfield, IL), 2 July 1841, 2:2.