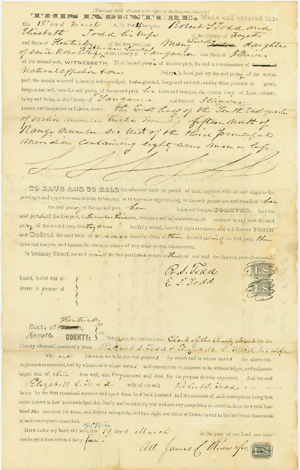 Deed of Robert S. Todd and Elizabeth Todd to Mary Lincoln, 18 March 18441
(Warrante Deed—Printed at the Office of the Sangamo Journal.)
THIS INDENTURE, Made and entered into this 18th day of March A.D. 1844, between Robert S Todd and Elizabeth Todd his wife of the County of Fayette and State of Kentucky of the first part, and Mary ^Lincoln^ [Todd ?] daughter of said Robert & wife ^of Abraham Lincoln^ of the County of Sangamon and State of Illinois of the second part, WITNESSETH: That the said parties of the first part, for and in consideration of the sum of natural affection & one Dollars, in hand paid by said party of the second part, the receipt whereof is hereby acknowledged, have granted, bargained and sold, and by these presents do grant, bargain and sell, unto the said party of the second part, her heirs and assigns, a certain tract of Land, situate, lying and being in the County of Sangamon and State of Illinois known and designated as follows, to-wit: The East half of the South East quarter of section number twelve Township fifteen north of Range number six West of the third principal meridian containing eighty acres more or less2
TO HAVE AND TO HOLD the aforesaid tract or parcel of land, together with all and singular the privileges and appurtenances thereto belonging, or in any-wise appertaining, to the only proper use and benefit of her the said party of the second part, her heirs and assigns FOREVER. And the said parties of the first part, for themselves their heirs, executors and administrators, do covenant to and with the said party of the second part, that they are lawfully seized, have full right to convey, and will forever WARRANT and Defend the said tract of LAND from the claim of them the said parties of the first part, their heirs and assigns, and against the claim or claims of any other person whomsoever.
In Testimony Whereof, the said parties of the first part have hereunto set their hand and seal the day and year aforesaid.
R. S. Todd
seal E. L. Todd
seal
[certification]
03/19/1844
Rodes, James C.
Signed, Sealed and delivered in presence of
Before me, the undersigned, Clerk of the County Court for the County aforesaid, personally came Robert S. Todd & Elizabeth L. Todd his wife who are known to me to be the real persons by whom and in whose names the above conveyance was executed, and by whom and in whose names said conveyance is proposed to be acknowledged, and acknowledged that of their free will, that they executed said deed for the purpose therein expressed. And the said Elizabeth L. Todd wife of the said Robert S. Todd being by me first examined separate and apart from her said husband and the contents of said conveyance being first make known to her acknowledged that freely and voluntarily and without any compulsion or coercion from her said husband she executed the same, and forever relinquished all her right and claim of Dower in and to the lands and tenements in said conveyance described.3
Given under my hand and seal, ^of office^this 19. day of March in the year of our Lord one thousand eighth hundred and forty four–
Att James. C. Rodes c[clerk] f c
seal
<Page 2>
[docketing]
Talbott, Benjamin
[docketing]
04/26/1844
Talbott, Benjamin
Filed for Record at 11. Oclock AM
April 26th 1844
Fee $1.00 paid
[certification]
04/26/1844
Talbott, Benjamin
Recorders office City of Springfield April 26th 1844
I Benjamin Talbott Recorder for said County do Certify that the within Deed of Conveyance is Recorded In my office in Book V. pages 289 & 290.
Benjamin Talbott R.[Recorder] S. C
1This partially-printed document was filled in by an unknown person. Mary Lincoln’s father Robert S. Todd and stepmother Elizabeth L. Todd signed the deed. Abraham Lincoln made the corrections and interlineations before filing it.
In January 1844, Abraham and Mary Lincoln contracted to purchase a home. In a letter to his son-in-law Ninian W. Edwards enclosing the deed, Robert Todd stated that he wished Lincoln “to avail himself of this Land immediately if it will be of any advantage or add to his comfort in any way.” The Lincolns paid $1,500 for their home the following May. In September 1854, Abraham and Mary sold the land from Robert Todd for $1,200.
Contract between Charles Dresser and Abraham Lincoln; Deed of Charles Dresser and Louisa W. Dresser to Abraham Lincoln; Deed of Mary Lincoln and Abraham Lincoln to Robert A. Anderson; Robert S. Todd to Ninian W. Edwards, March 13, 1844, Extended Family, Lincoln Collection, Abraham Lincoln Presidential Library and Museum (Springfield, IL); Thomas F. Schwartz, Thomas F. Schwartz, "Lincoln's Published Writings: A History & Supplement,” Journal of the Abraham Lincoln Association 9 (1987), 39.
2The land described here lies approximately four miles southwest of Springfield in Curran Township in central-western Sangamon County.
3“Dower” is a term that refers to the legally protected lifetime right of a woman to one-third of her husband’s lands and personal property. Dower was intended to provide for the support of a widow and her children. Because of this, a husband could not convey property without the consent of his wife.
Christopher A. Schnell, “Wives, Widows, and Will Makers: Woman and the Law of Property,” In Tender Consideration: Women, Families, and the Law in Abraham Lincoln’s Illinois (Urbana: University of Illinois Press, 2003), 129, 133; Joan R. Gundersen, “Women and Inheritance in America,” Robert K. Miller Jr. and Stephen J. McNamee, eds., Inheritance and Wealth in America (New York: Springer Science and Business Media, 1998), 94.