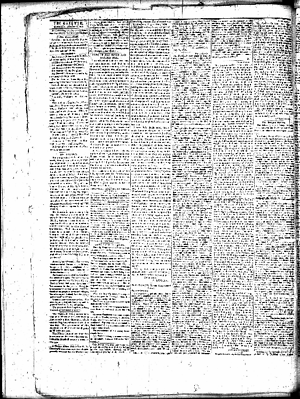 Related Document(s):
Abraham Lincoln to the Voters of the Seventh Congressional District

Abraham Lincoln to the Voters of the Seventh Congressional District, 31 July 18461
To the Voters of the Seventh Congressional District.Fellow Citizens:
A charge having got into circulation in some of the neighborhoods of this District, in substance that I am an open scoffer at Christanity, I have by the advice of some friends concluded to notice the subject in this form.2 That I am not a member of any Christian Church, is true; but I have never denied the truth of the Scriptures; and I have never spoken with intentional disrespect of religion in general, or of any denomination of Christians in particular. It is true that in early life I was inclined to believe in what I understand is called the “Doctrine of Necessity”—that is, that the human mind is impelled to action, or held in rest by some power, over which the mind itself has no control; and I have sometimes (with one, two or three, but never publicly) tried to maintain this opinion in argument—The habit of arguing thus however, I have, entirely left off for more than five years—And I add here, I have always understood this same opinion to be held by several of the Christian denominations. The foregoing, is the whole truth, briefly stated, in relation to myself, upon this subject.
I do not think I could myself, be brought to support a man for office, whom I knew to be an open enemy of, and scoffer at, religion.—Leaving the higher matter of eternal consequences, between him and his Maker, I still do not think any man has the right thus to insult the feelings, and injure the morals, of the community in which he may live.—If, then, I was guilty of such conduct, I should blame no man who should condemn me for it; but I do blame those, whoever they may be, who falsely put such a charge in circulation against me.
A. LINCOLN.July 31, 1846.3
1Abraham Lincoln published this as a handbill in response to allegations made against him by his opponent Peter Cartwright in the race for the Seventh Congressional District seat in the U.S. House of Representatives. Another version of this handbill was published in the Tazewell Whig.
Abraham Lincoln to Allen N. Ford; Theodore C. Pease, ed., Illinois Election Returns, 1818-1848, vol. 18 of Collections of the Illinois State Historical Library (Springfield: Illinois State Historical Library, 1923), 159; Michael Burlingame, Abraham Lincoln: A Life (Baltimore: The Johns Hopkins University Press, 2008), 1:238-39.
2The Seventh Congressional District included the counties of Cass, Logan, Marshall, Mason, Menard, Morgan, Putnam, Sangamon, Scott, Tazewell, and Woodford.
Howard W. Allen and Vincent A. Lacey, eds., Illinois Elections, 1818-1990 (Carbondale and Edwardsville: Southern Illinois University Press, 1992), 126.
3In the election of August 3, Lincoln defeated Cartwright, receiving 6,340 votes (56 percent) to 4,829 votes (42 percent) for Cartwright.
Theodore C. Pease, ed., Illinois Election Returns, 1818-1848, 159.

Abraham Lincoln to the Voters of the Seventh Congressional District. [1846-07-31]. /documents/D200403. The Papers of Abraham Lincoln Digital Library.