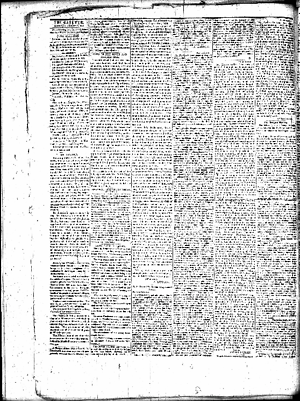 Abraham Lincoln to Allen N. Ford, 11 August 18461
Springfield, August 11th, 1846.Mr. Ford:—
I see in your paper of the 8th inst. a communication in relation to myself, of which it is perhaps expected of me to take some notice.2
Shortly before starting on my tour through yours, and the other Northern counties of the District,3 I was informed by letter from Jacksonville that Mr. Cartwright was whispering the charge of infidelity against me in that quarter.—4 I at once wrote a contradiction of it, and sent it to my friends there, with the request that they should publish it or not, as in their discretion they might think proper, having in view the extent of the circulation of the charge, as also the extent of credence it might be receiving. They did not publish it. After my return from your part of the District, I was informed that he had been putting the same charge in circulation against me in some of the neighborhoods in our own, and one or two of the adjoining counties.—I believe nine persons out of ten had not heard the charge at all; and, in a word, its extent of circulation was just such as to make a public notice of it appear uncalled for; while it was not entirely safe to leave it unnoticed. After some reflection, I published the little hand-bill, herewith enclosed, and sent it to the neighborhoods above referred to.
I have little doubt now, that to make the same charge—to slyly sow the seed in select spots—was the chief object of his mission through your part of the District, at a time when he knew I could not contradict him, either in person or by letter before the election. And, from the election returns in your county, being so different from what they are in parts where Mr. Cartwright and I are both well known, I incline to the belief that he has succeeded in deceiving some honest men there.5
As to Mr. Woodward, “our worthy commissioner from Henry,” spoken of by your correspondent, I must say it is a little singular that he should know so much about me, while, if I ever saw him, or heard of him, save in the communication in your paper, I have forgotten it.6 If Mr. Woodward has given such assurance of my character as your correspondent asserts, I can still suppose him to be a worthy man; he may have [believed what he said; but there is,]7 even in that charitable view of his case, one lesson in morals which he might, not without profit, learn of even me—and that is, never to add the weight of his character to a charge against his fellow man, without knowing it to be true.—I believe it is an established maxim in morals that he who makes an assertion without knowing whether it is true or false, is guilty of falsehood; and the accidental truth of the assertion, does not justify or excuse him. This maxim ought to be particularly held in view, when we contemplate an attack upon the reputation of our neighbor. I suspect it will turn out that Mr. Woodward got his information in relation to me, from Mr. Cartwright; and I here aver, that he, Cartwright, never heard me utter a word in any way indicating my opinions on religious matters, in his life.
It is my wish that you give this letter, together with the accompanying hand-bill, a place in your paper.8
Yours truly,A. LINCOLN.
1No handwritten text of this letter has been located.
2The August 8, 1846 issue of The Illinois Gazette is not extant.
3Following the adjournment of the Illinois Supreme Court on February 9, 1846, Abraham Lincoln toured the northern counties of the Seventh Congressional District.
The Lincoln Log: A Daily Chronology of the Life of Abraham Lincoln, 9 February 1846, http://thelincolnlog.org/Results.aspx?type=CalendarDay&day=1846-02-09; Abraham Lincoln to Benjamin F. James.
4A Democrat, Peter Cartwright opposed Lincoln in the election to the U.S. House of Representatives from the Seventh Congressional District, which included the counties of Cass, Logan, Marshall, Mason, Menard, Morgan, Putnam, Sangamon, Scott, Tazewell, and Woodford.
Theodore C. Pease, ed., Illinois Election Returns, 1818-1848, vol. 18 of Collections of the Illinois State Historical Library (Springfield: Illinois State Historical Library, 1923), 159; Howard W. Allen and Vincent A. Lacey, eds., Illinois Elections, 1818-1990 (Carbondale and Edwardsville: Southern Illinois University Press, 1992), 126.
5In the election of August 3, 1846, Lincoln defeated Cartwright, receiving 6,340 votes to 4,829 votes for Cartwright in the district as a whole, but in Marshall County, Lincoln received 252 votes to Cartwright’s 323, and in the adjacent county of Woodford, Lincoln garnered 215 votes to Carwright’s 300. Marshall and Woodford were the only counties Lincoln lost.
Theodore C. Pease, ed., Illinois Election Returns, 1818-1848, 159.
6Mr. Woodward could not be positively identified.
7The original source text has a crease that makes the text illegible. The supplied text comes from the transcription in Roy P. Basler’s, The Collected Works of Abraham Lincoln.
Roy P. Basler, ed., The Collected Works of Abraham Lincoln (New Brunswick, NJ: Rutgers University Press, 1953), 1:383.
8This letter and Lincoln’s handbill were printed in the August 15, 1846 issue of The Illinois Gazette. Another version of Lincoln’s handbill was published in the Tazewell Whig.