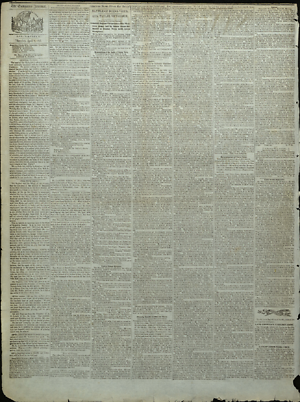 Proceedings of the John J. Hardin Memorial Meeting regarding the Battle of Buena Vista, 5 April 1847
IN MEMORY OF THE GALLANT DEAD.
On Monday last there was a large meeting of our citizens held at the Court House, at which the following proceedings took place:
Pursuant to previous notice, a large and respectable meeting of citizens of Springfield was held at the court house, on Monday afternoon, the 5th inst., for the purpose of taking into consideration the propriety of adopting measures to co-operate with citizens in other counties of this State, in their expression of sympathy and regret for Gen. J. J. Hardin and his companions in arms from Illinois, who nobly fell in defence of their country’s honor, and to pay a suitable tribute of respect and admiration for the bravery and fortitude of our volunteers at the battle of Buena Vista, in Mexico.
On motion of Hon. A. Lincoln,
Judge Treat was called to the chair, and on motion of J. T. Stuart, Esq.,[Esquire] Thomas Moffett, Esq. and S. S. Brooks were appointed Secretaries.
The Hon. Mr. Lincoln then explained the objects of the meeting in a few appropriate remarks, when he offered the following resolutions, which were unanimously adopted:
Resolved: That, while we sincerely rejoice at the signal triumph of the American arms at Buena Vista, and contemplate with the highest pride, the imperishable honor won by our Illinois brethren, upon that bloody field, it is with the deepest grief we have learned of the fall of the many brave and generous spirits there, and especially, of that of Col.[Colonel] J. J. Hardin.
Resolved: That William Pope, Mason Brayman, John Calhoun, Antrim Campbell and Geo. L. Huntington be a committee to correspond with the people, or committees of other counties, and especially with Col. Hardin’s immediate neighbors at Jacksonville, on the subject embraced in these resolutions; and that said committee have power to fill vacancies, and to call subsequent meetings, when, in their judgment it becomes proper.
Resolved: That the proceedings of this meeting be published in both the papers in this city.1
On motion adjourned.
SAMUEL H. TREAT, Chm’n.[Chairman]THOS MOFFETT,S. S. BROOKS, Sec’s.[Secretaries]
1While the Sangamo Journal published the proceedings, the other paper in the Springfield, the Illinois State Register, did not publish them.

Proceedings of the John J. Hardin Memorial Meeting regarding the Battle of Buena Vista. [1847-04-05]. /documents/D200412. The Papers of Abraham Lincoln Digital Library.