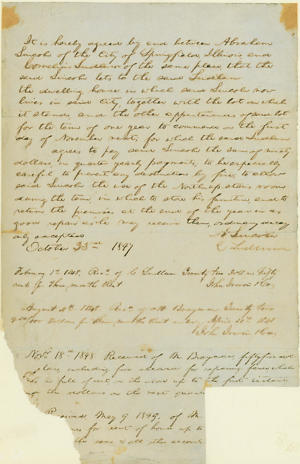 Contract between Abraham Lincoln and Cornelius Ludlum, 23 October 18471
It is hereby agreed by and between Abraham Lincoln of the City of Springfield, Illinois, andCornelius Ludlum of the same place, that the said Lincoln lets to the saidLudlumthe dwelling house in which said Lincoln now lives in said City, together with the lot on which it stands, and the other appurtenances of said lot for the term of one year to commence on the first day of November next; for which the saidLudlum agrees to pay said Lincoln the sum of ninety dollars, in quarter yearly payments; to be especially careful to prevent any destruction by fire; to allow said Lincoln the use of the North-up-stairs room during the term, in which to store his furniture, and to return the premises at the end of the year in as good repair as he may receive them, ordinary decay only excepted.2
October 23rd 1847A LincolnC Ludlum
[endorsement]
02/01/1848
Irwin, John
February 1st 1848, Recd[Received] of C Ludlum Twenty two Dollars Fifty cents for Three months RentJohn Irwin & Co
[endorsement]
08/04/1848
Irwin, John
August 4th 1848. Recd of M Brayman Twenty two & 50/100 Dollars for three months Rent ending April 20th 1848John Irwin & Co
[endorsement]
11/18/1848
Lincoln, Abraham (President)
Novr[November] 18th 1848. Received of M. Brayman, fiftyfive dollars, including five allowed for repairing fence, which is in full of rent, on the above up to the first instant, [and?] ten dollars on the next quarte[r] . . .
[endorsement]
05/09/1849
Lincoln, Abraham (President)
Received, May 9. 1849. of M. [Brayman] . . . for rent of house up to . . . the same, & all other accounts . . .
<Page 2>
[docketing]
Lincoln with Ludlum
Lease.
Fr.[From] Nov.[November] 1. 1847.
[docketing]
Lincoln Rent
Pd[Paid] in full
1Abraham Lincoln wrote and signed the document. Cornelius Ludlum signed his name.
2Lincoln rented out his family’s home for the term he spent in Congress, during which time he lived in Washington, DC. His family accompanied him to Washington and spent the remainder of his term with Mary Lincoln’s family in Lexington, Kentucky.
Michael Burlingame, Abraham Lincoln: A Life (Baltimore: The Johns Hopkins University Press, 2008), 1:253-54, 262; Abraham Lincoln to Mary Lincoln.