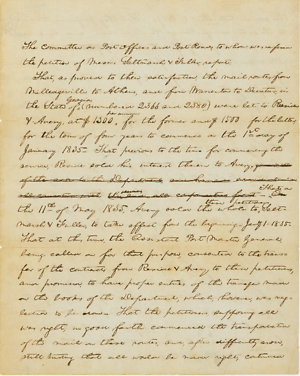 Report on the Petition of William Fuller and Orlando Saltmarsh, 19 January 18481
The Committee on Post Offices and Post Roads, to whom was refered the petition of Messrs[Messieurs] Saltmarsh & Fuller, report:2
That, as proved to their satisfaction, the mail routes from Milledgeville to Athens, and from Warrenton to Decatur, in the State of ^Georgia,^ (numbered 2366 and 2380) were let to Reeside & Avery, at $1300 ^per annum^ for the former and $1500 for the latter, for the term of four years to commence on the 1st day of January 1835– That previous to the time for commencing the service, Reside sold his interest therein to Avery,– gave notice of the sale to the Department, and has ever since disclaimed all connection with the ^services^ and all compensation for it– ^That on^ On the 11th of May 1835, Avery sold the whole to ^these petitioners^ Saltmarsh & Fuller, to take effect from the beginning– Jany 1– 1835– That at this time, the Assistant Post Master General, being called on for that purpose, consented to the transfer of the contracts from Reside & Avery to these petitioners, and promised, to have proper entries of the transfer made on the books of the Department, which, however, was neglected to be done– That the petitioners, supposing all was right, in good faith commenced the transportation of the mail on these routes, and, after difficulty arose, still trusting that all would be made right, continued
<Page 2>
the service till Decr[December] 1– 1837– That they performed the service to the entire satisfaction of the Department, and have never been paid any thing for it, except $908–15 cents– That the difficulty occurred as follows: Mr Barry was Post Master General at the times of making the contracts and the attempted transfer of them– Mr Kendall succeeded Mr Barry, and finding Resside Reeside apparently in debt to the Department, and these contracts still standing in the names of Reeside & Avery, refused to pay for the service under them, otherwise than by credits to Reside; afterwards, however, he divided the compensation, still crediting one half to Reeside, and directing the other to be paid to Aver the order of Avery, who, disclaimed all right to it– After discontinuing the service, these petitioners, supposing they might have legal redress against Avery, brought suit against him, in New-Orleans; in which suit they failed, on the ground that Avery had complied with his contract, having done so much towards the transfer, as they had accepted, and been satisfied with– Still later, the Department sued Reeside on his supposed indebtedness, and by a verdict of the jury it was determined, that the Department was indebted to him, in a sum much beyond all the credits given him on the account above stated– Under these circumstances we ^committee^ consider the petitioners clearly entitled to relief; and
<Page 3>
we ^they^ report a bill accordingly; lest, however, there should be some mistake as to the amount which they have already received, we so frame it as that, by adjustment at the Department they may be paid so much as remains unpaid ^for service actually performed by them,^ not charging them with the credits given Reeside. The Committee think it not improbable that the petion petitioners purchased the right of Avery to be paid for the service from the first of January, till their purchase on May 11th 1835; but the evidence on this point being very vague, they forbear to report in favour of allowing it–3
<Page 4>
[docketing]
Lincoln, Abraham (President)
Report of the Committee on Post-Offices & Post-roads, on the Petition of Messrs. Saltmarsh & Fuller–4
[docketing]
Lincoln
HR.[House of Representatives] CW[Committee Whole]– tom[tomorrow]–
bill– rep[reported], pr[printed],
[docketing]
7
[docketing]
01/19/1848
Report No 102
William Fuller and Orlando Saltmarsh (to accompany H R bill No 92 ^ 92 ^) ^92^
January 19, 1848
[docketing]
Mr Lincoln from the Committee on the Post Office and Post Roads made the following report.
[docketing]
[Butler?]
2
[docketing]
1380
1Abraham Lincoln wrote this report.
2On December 15, 1847, Thomas B. King presented, in the House of Representatives, the petition of Orlando Saltmarsh and William Fuller--a petition originally presented on January 20, 1845. The House referred the petition to the Committee on the Post Office and Post Roads, of which Lincoln was a member.
U.S. House Journal. 1847. 30th Cong., 1st sess., 60, 80; Cong. Globe, 30th Cong., 1st Sess., 19 (1847).
3Upon receiving this report and accompanying bill, the House referred the bill to the Committee of the Whole, ordered the report and bill printed, and made the bill the order of the day for January 20. The House passed the bill on June 2, 1848. On June 3, the Senate referred the bill to the Committee on the Post Office and Post Roads. The committee reported back the bill on June 15 without amendment. The Senate took no further action before the close of the session. The Senate passed the bill on February 1, 1849. The act became law on February 10.
U.S. House Journal. 1848. 30th Cong., 1st sess., 265-66, 870; U.S. Senate Journal. 1848. 30th Cong., 1st sess., 372, 389; U.S. House Journal. 1849. 30th Cong., 2nd sess., 358, 378, 420; U.S. Senate Journal. 1849. 30th Cong., 2nd sess., 173, 184, 208.
4Lincoln wrote this docketing.

Report on the Petition of William Fuller and Orlando Saltmarsh. [1848-01-19]. /documents/D200446. The Papers of Abraham Lincoln Digital Library.