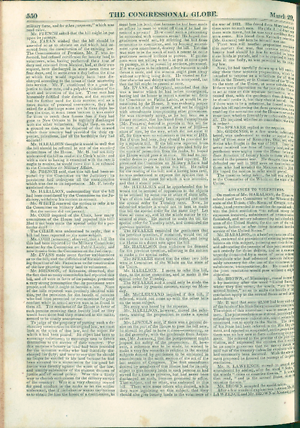 Report of Legislative Proceeding regarding Military Bounty Lands, 29 March 18481
Mr. LINCOLN said, if there was a general desire on the part of the House to pass the bill now, he should be glad to have it done—concurring, as he did generally, with the gentleman from Arkansas, (Mr. Johnson,) that the postponement might jeopard the safety of the proposition. If, however, a reference was to be made,2 he wished to make a very few remarks in relation to the several subjects desired by gentlemen to be embraced in amendments to the ninth section of the act of the last session of Congress.3 The first amendment desired by members of this House had for its only object to give bounty lands to such persons as had served for a time as privates, but had never been discharged as such, because promoted to office. That subject, and no other, was embraced in this bill. There were some others who desired, while they were legislating on this subject, that they should also give bounty lands to the volunteers of the war of 1812. His friend from Maryland said there were no such men. He (Mr. L.) did not say there were many, but he was very confident there were some. His friend from Kentucky near him (Mr. Gaines) told him he himself was one.
There was still another proposition touching this matter: that was, that persons entitled to bounty land should by law be entitled to locate these lands in parcels, and not be required to locate them in one body, as was provided by the existing law.
Now, he had carefully drawn up a bill embracing these three separate propositions, which he intended to propose as a substitute for all these bills in the House, or in Committee of the Whole on the state of the Union, at some suitable time. If there was a disposition on the part of the House to act at once on this separate proposition, he repeated that, with the gentleman from Arkansas, he should prefer it, lest they should lose all. But if there was to be a reference, he desired to introduce his bill embracing the three propositions, thus enabling the committee and the House to act at the same time, whether favorably or unfavorably, upon all. He inquired whether an amendment was now in order?
The SPEAKER replied in the negative.4
1Abraham Lincoln made these remarks amid debate on a bill introduced in the House of Representatives by Representative Richard French. Members of the House and several House committees proposed several similarly titled bills during this session. On January 12, the Committee on Military Affairs introduced its version (H.B. 55). Lincoln offered his own bill (H.B. 89) on January 17. The House referred Lincoln’s bill to the Committee on Military Affairs, which apparently took no action on it. On March 7, Alexander Evans of the Committee of Public Lands introduced H.B. 297. French’s bill came out of the Committee on the Judiciary.
U.S. House Journal. 1848. 30th Cong., 1st sess., 223, 258, 513, 626.
2The House was considering a motion to refer the bill to the Committee of the Whole.
U.S. House Journal. 1848. 30th Cong., 1st sess., 626.
3Lincoln references an act passed on February 11, 1847. Section nine awarded non-commissioned officers, privates, and musicians warrants for 160 acres of land in thanks for their service in the Mexican War.
“An Act to Raise for a Limited Time an Additional Military Force, and for Other Purposes,” 11 February 1847, Statutes at Large of the United States 9 (1862):125-26.
4After additional debate, the House referred the bill to the Committee of the Whole. Meanwhile, the House considered other versions, combining H.B. 55 and H.B. 297, and referring this bill to the Committee of the Whole. The House failed to pass either this bill or French’s bill. Members of the Senate, meanwhile, debated S.B. 188, introduced on March 29, which also sought to amend section nine of the act of February 1847. The Senate passed S.B. 188 on May 12, and the House concurred on May 16. The act became law on May 27. The act amended the 1847 law by extending the “relatives” provision of the ninth section to include brothers and sisters of deceased soldiers who qualified for bounty lands.
U.S. House Journal. 1848. 30th Cong., 1st sess., 626, 658, 721, 757, 778, 805, 825, 836; Cong. Globe, 30th Cong., 1st Sess., 550 (1848); U.S. Senate Journal. 1848. 30th Cong., 1st sess., 244-45, 276, 334, 342-43; “An Act to Raise for a Limited Time an Additional Military Force, and for Other Purposes,” 11 February 1847, 125-26.