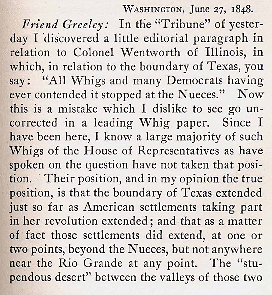 Abraham Lincoln to Horace Greeley, 27 June 18481
Washington, June 27, 1848.Friend Greeley:
In the “Tribune” of yesterday I discovered a little editorial paragraph in relation to Colonel Wentworth of Illinois, in which, in relation to the boundary of Texas, you say: “All Whigs and many Democrats having ever contended it stopped at the Nueces.” Now this is a mistake which I dislike to see go uncorrected in a leading Whig paper. Since I have been here, I know a large majority of such Whigs of the House of Representatives as have spoken on the question have not taken that position. Their position, and in my opinion the true position, is that the boundary of Texas extended just so far as American settlements taking part in her revolution extended; and that as a matter of fact those settlements did extend, at one or two points, beyond the Nueces, but not anywhere near the Rio Grande at any point. The “stupendous desert” between the valleys of those two
<Page 2>
rivers, and not either river, has been insisted on by the Whigs as the true boundary.
Will you look at this? By putting us in the position of insisting on the line of the Nueces, you put us in a position which, in my opinion, we cannot maintain, and which therefore gives the Democrats an advantage of us.2 If the degree of arrogance is not too great, may I ask you to examine what I said on this very point in the printed speech I send you.3
Your truly,A. Lincoln.
1A handwritten version of this letter has not been located.
2Lincoln may have been concerned it would give the Democrats an advantage in the upcoming presidential election.
3The “little editorial paragraph” that Lincoln references appeared in the context of Wentworth’s vote on June 21 not to reconsider the vote engrossing a mail route bill, which the Tribune contended contained amendments that extended mail routes to the Rio Grande, which Greeley and his Washington correspondent interpreted as Wentworth abandoning the Wilmot Proviso. The Washington correspondent made this charge on June 23, and Wentworth wrote Greeley on the same day refuting the charge, arguing that he hoped by so voting to prevent a long discussion on the border of Texas and therefore save the bill. As for the Wilmot Proviso and the extension of slavery, Wentworth affirmed that “I never have voted against any such Proviso, and never expect to.” Lincoln voted to reconsider the vote for engrossment, but the motion failed.
New-York Daily Tribune, 23 June 1848, 2:4; 26 June 1848, 2:2, 5; U.S. House Journal. 1848. 30th Cong., 1st sess., 931-32.