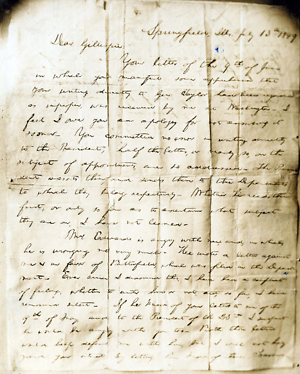 Abraham Lincoln to Joseph Gillespie, 13 July 18491
Springfield, Ills. July 13th 1849Dear Gillespie:
Your letter of the 9th of June in which you manifest some apprehension that your writing directly to Gen: Taylor had been regarded as improper, was received by me at Washington–2 I feel I owe you an apology for not answering it sooner– You committed no error in writing directly to the President; half the letters, or nearly so, on the subject of appointments, are so addressed– The President assorts them, and sends them to the Departments to which they belong respectively– Whether he reads them first, or only so far as to ascertain what subject they are on, I have not learned–
Mr Edwards is angry with me; and, in which he is wronging me very much– He wrote a letter against me & in favor of Butterfield, which was filed in the Department–3 Ever since I discovered this, I have had a conflict of feeling, whether to write him or not; and, so far, I have remained silent– If he knew of your leters to me of the 9th of May, and to the President of the 23rd I suspect he would be angry with you too–4 Both those letters would help defend me with him; but I will not hazzard your interest by letting him know of them. To avoid5
<Page 2>
that, I write you a separate letter which I wish you would show him when it may be convenient–6
You will please accept my sincere thanks for the very flattering terms in which you speak of me in your letter to the President– I withdrew the papers on file in my behalf, by which means your letter is now in my possession–7
Yours as everA. Lincoln
1Abraham Lincoln wrote and signed this letter.
2The letter from Joseph Gillespie that Lincoln references has not been located. However, it was most likely a response to a letter Lincoln wrote Gillespie requesting a letter of recommendation in support of his candidacy for commissioner of the U.S. General Land Office. Originally, only Justin H. Butterfield, James L. D. Morrison, and Cyrus Edwards were vying to become commissioner. Lincoln entered the competition after learning that Butterfield was favored over Morrison and Edwards. Supporters of each candidate sent letters of reference and recommendation to both President Zachary Taylor and Secretary of the Interior Thomas Ewing. Although the U.S. Department of the Interior oversaw the U.S. General Land Office, President Taylor was ultimately responsible for appointing the commissioner of the U.S. General Land Office. In the end, the job went to Butterfield. See the General Land Office Affair.
Lincoln received Gillespie’s letter in Washington, DC, because, as competition for the job intensified, William H. Henderson and Josiah Lucas, Lincoln supporters living in DC, had urged Lincoln to come to the nation’s capital to personally lobby for the position. Lincoln arrived on or before June 19, 1849.
William H. Henderson to Abraham Lincoln; William H. Henderson to Abraham Lincoln; Josiah M. Lucas to Abraham Lincoln; The Lincoln Log: A Daily Chronology of the Life of Abraham Lincoln, 10 June 1849, http://www.thelincolnlog.org/Results.aspx?type=CalendarDay&day=1849-06-10; 19 June 1849, http://www.thelincolnlog.org/Results.aspx?type=CalendarDay&day=1849-06-19.
3Lincoln also mentions Edwards’ letter against him and in favor of Butterfield in a June 22, 1849 letter to Ewing. In response, Ewing provided Lincoln a letter that does not mention Edwards, but affirms that had Lincoln sought the appointment at the start of the competition, he would have received the position.
4Gillespie’s May 9, 1849 letter to Lincoln has not been located.
5In the copy of the document in the project’s possession, “To avoid” is blurred almost beyond legibility. Roy P. Basler and the editors of The Collected Works of Abraham Lincoln, who saw the original, rendered it “To avoid,” and the project editors have followed suit.
Roy P. Basler, ed., The Collected Works of Abraham Lincoln (New Brunswick, NJ: Rutgers University Press, 1953), 2:57.
6Lincoln’s second letter, also dated July 13, 1849, discusses how his friendship with Edwards impacted the timing and his willingness to enter the competition for the position of commissioner of the U.S. General Land Office.
7Lincoln wrote Ewing June 22, 1849, requesting that all letters of recommendation and reference filed with the Department of the Interior pertaining to his candidacy for commissioner of the U.S. General Land Office be returned to him. Ewing complied, returning all but three of the letters from Lincoln’s file.
Thomas Ewing to Abraham Lincoln; Abraham Lincoln to Thomas Ewing; Thomas Ewing to Abraham Lincoln; Abraham Lincoln to Thomas Ewing.