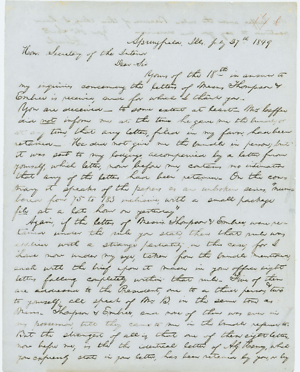 Abraham Lincoln to Thomas Ewing, 27 July 18491
Springfield, Ills. July 27th 1849Hon: Secretary of the InteriorDear Sir:
Yours of the 18th in answer to my inquiries concerning the letters of Messrs[Messieurs] Thompson & Embree is received, and for which I thank you–2
You are deceived– to some extent at least– Mr Caffee did not inform me at the time he gave me the bundle, or at any time, that any letters, filed in my favor, had been retained– He did not give me the bundle in person; but it was sent to my lodgings,3 accompanied by a letter from yourself, which letter, now before me, contains no intimation that any of the letters had been retained– On the contrary it speaks of the papers as an unbroken series, "numbered from 75 to 183 inclusive, with a small package file at a late hour on yesterday"
Again, if the letters of Messr's[Messieurs]. Thompson & Embree, were retained under the rule you state, then that rule was applied with a strange partiality in this case; for I have now under my eye, taken from the bundle mentioned, each with the brief upon it made in your office, eight letters falling completely within that rule– Five of them are addressed to the President, one to a third person, ^&^ two to yourself; all speak of Mr B. in the same tone as Messr– Thompson & Embree, and none of them was ever in my possession, till they came to me in the bundle referred to. But the strangest of all is, that one of these eight letters, now before me, is the the identical letter of A. G. Henry, which you expressly state in your letter, has been retained by you, or by
<Page 2>
Mr Caffee, under the rule–4 Because of these things, I have ventured to say your are deceived–5
Your Obt Servt[Obedient Servant]A. Lincoln
1Abraham Lincoln wrote and signed this letter.
2Thomas Ewing’s July 18, 1849 letter to Lincoln addressed Lincoln’s concerns about not receiving the letters of recommendation that Richard W. Thompson and Elisha Embree wrote in support of his qualifications for the position of commissioner of the U.S. General Land Office. Originally, only Justin H. Butterfield, James L. D. Morrison, and Cyrus Edwards were vying to become commissioner. Lincoln entered the competition after learning that Butterfield was favored over Morrison and Edwards. In June 1849, President Zachary Taylor awarded Butterfield the appointment. See the General Land Office Affair.
Immediately following Butterfield’s appointment, Lincoln wrote Ewing and requested that all letters of recommendation and reference filed with the U.S. Department of the Interior pertaining to his candidacy for the position be returned to him. Ewing complied, returning all but three of the letters from Lincoln’s file. Lincoln requested an explanation for the missing letters, expressing particular concern over Thompson’s and Embree’s letters. Ewing responded in his July 18, 1849 letter to Lincoln.
Thompson’s and Embree’s letters of recommendation have not been located.
Thomas Ewing to Abraham Lincoln; Abraham Lincoln to Thomas Ewing.
3In his July 18, 1849 letter to Lincoln, Ewing stated that Robert H. Caffee, a clerk with the U.S. Department of the Interior, the department which oversaw the U.S. General Land Office, told him that he delivered the letters of recommendation Lincoln requested to him and informed Lincoln at that time that any letters which were addressed to President Taylor or contained statements about anyone other than Lincoln were retained by the department in keeping with an established department rule.
4This is a reference to Ewing’s assertion, in his July 18, 1849 letter to Lincoln, that in addition to Thompson and Embree’s letters, the U.S. Department of the Interior also retained Anson G. Henry’s letter of recommendation for Lincoln, purportedly because it was addressed to President Taylor rather than to Lincoln. Henry’s letter of recommendation has not been located.
5Ewing’s reply, if he wrote one, has not been located. Lincoln suspected that Thompson's and Embree’s letters were purposefully omitted by someone at the Department of the Interior in order to give Butterfield an advantage over him in the competition for the job. However, he later wrote John Addison that his loyalty to both Taylor and “the great whig cause” induced him to remain silent about his suspicions.
Eventually, on April 22, 1850, the Democrat-controlled U.S. House of Representatives formed a committee under William A. Richardson to investigate Ewing’s role in and handling of patronage appointments as well as his management of pension payments and Department of the Interior accounts. On June 8, 1850, the New York Herald reported that Butterfield’s appointment as commissioner of the U.S. General Land Office was one patronage appointment that the Richardson Committee was investigating, particularly with regard to letters missing from the file on Lincoln that was shown to President Taylor prior to Taylor selecting the final appointee. However, when the Committee filed its final reports on September 4-7, 1850, it made no finding regarding Butterfield’s appointment. The Whig-controlled U.S. Senate also exonerated Ewing of all charges, although suspicions remained in some Whig circles that Ewing had indeed suppressed letters of recommendation from Lincoln’s file.
Cong. Globe, 31st Cong., 1st Sess., Appendix, 1209-37 (1850); Michael Burlingame, Abraham Lincoln: A Life (Baltimore: The Johns Hopkins University Press, 2008), 1:304; Biographical Directory of the American Congress 1774-1996 (Alexandria, VA: CQ Staff Directories, 1997), 1729; Paul I. Miller, “Lincoln and the Governorship of Oregon,” The Mississippi Valley Historical Review 23 (December 1936), 393-94; The New York Herald (NY), 8 June 1850, 3:5.