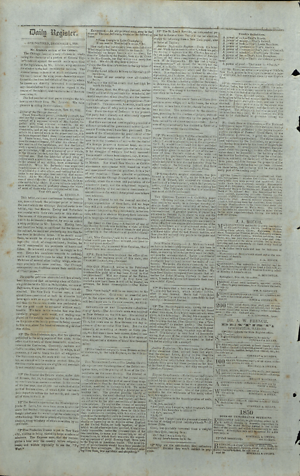 Abraham Lincoln to Charles L. Wilson, 21 November 18491
Springfield, Nov. 21, 1849.Editor of the Chicago Journal:Dear Sir—
Some person, probably yourself, has sent me the number of your paper containing an extract of a supposed speech of Mr. Linder, together with your editorial comments.2 As my name is mentioned, both in the speech and in the comments, and as my attention is directed to the article by a special mark in the paper sent me, it is perhaps expected that I should take some notice of it. I have to say, then, that I was absent, from before the commencement, till after the close of the late session of the legislature, and that the fact of such a speech having been delivered never came to my knowledge, till I saw a notice of your article, in the Illinois Journal, one day before your paper reached me.3 Had the intention of any whig to deliver such a speech been known to me, I should, to the utmost of my ability, have endeavored to prevent it. When Mr. Butterfield was appointed commissioner of the land office, I expected him to be a faithful and able officer, and nothing has since come to my knowledge disappointing that expectation.4 As to Mr. Ewing, his position has been one of great difficulty.5 I believe him, too, to be an able and faithful officer. A more intimate acquaintance with him, would probably change the views of most of those who have complained of him.
Your ob’t serv’t[obedient servant],A. LINCOLN.
1The original letter in Abraham Lincoln’s hand is not extant.
2On November 2, 1849, Usher F. Linder delivered a speech on national affairs in the Illinois House of Representatives. The entire text of Linder’s remarks is not extant, but excerpts indicate that Linder criticized Secretary of the Interior Thomas Ewing for his patronage appointments, particularly the selection of Justin H. Butterfield as commissioner of the U.S. General Land Office. See the General Land Office Affair. On November 8, the Daily Register, the Democratic paper in Springfield, published an excerpt of Linder’s speech with editorial comment, and on November 14, the Chicago Daily Journal responded with its own excerpt and commentary. The copy of the issue of the Chicago Daily Journal sent to Lincoln is not extant.
Daily Register (Springfield, IL), 8 November 1849, 2:1-2; Chicago Daily Journal (IL), 14 November 1849, 2:2-3.
3The November 19, 1849 edition of the Illinois Daily Journal contained a notice which discussed the Chicago Daily Journal’s coverage of Linder’s speech. The Illinois Daily Journal editors asserted that Linder did not speak with the authority of the Whigs, that the Chicago Daily Journal should not have introduced Lincoln’s name into the matter, and that both Butterfield and Ewing were competent and qualified men performing their duties to the best of their abilities.
Illinois Journal (Springfield, IL), 19 November 1849, 2:1.
4President Zachary Taylor appointed Butterfield commissioner of the U.S. General Land Office over Lincoln. Lincoln had sought the position after learning that Butterfield was favored over James L. D. Morrison and Cyrus Edwards, the other competitors for the job. See the General Land Office Affair. Even while Lincoln’s friends pressed him to compete against Butterfield for the appointment, and even as he asserted that Butterfield had weak claims to the position, Lincoln reminded his friends that Butterfield was “qualified to do the duties of the office.” After Butterfield received the appointment, Lincoln encouraged his “good friends every where” to approve Butterfield’s appointment, or, at the very least, “be silent when they can not.”
Abraham Lincoln to Josiah M. Lucas; Abraham Lincoln to David Davis.
5Taylor’s administration received heavy criticism for its handling of political patronage appointments, particularly after the Democratic Party won numerous elections in 1849. Although Taylor was ultimately responsible for appointing the commissioner of the U.S. General Land Office, he was criticized for delegating most decisions on patronage appointments either to members of his cabinet or to the departments under which the appointments fell. Many Midwestern Whigs believed Ewing wielded too much power with regard to patronage appointments, and vigorously protested his use of power.
Michael F. Holt, The Rise and Fall of the American Whig Party: Jacksonian Politics and the Onset of the Civil War (New York: Oxford University Press, 1999), 418-19, 422-24, 426.