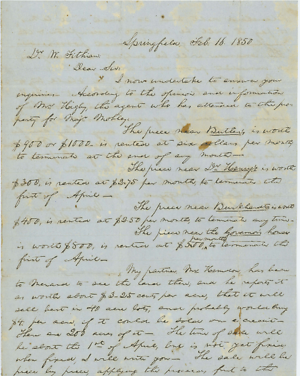 Abraham Lincoln to William Fithian, 16 February 18501
Springfield, Feb: 16. 1850Dr W. Fithian:Dear Sir:
I now undertake to answer your enquiries– According to the opinion and information of Mr Higby, the agent who has attended to the property for Majr Mobley:
The piece near Butler's is worth $900 or $1000– is rented at six dollars per month, to terminate at the end of any month–
The piece near Dr Henry's is worth $300, is rented at $2.75 per month, to terminate the first of April–
The piece near Burkhardt's is worth $400, is rented at $2.50 per month, to terminate any time–
The piece near the Governor's house is worth $800, is rented at $5.00, ^per month^ to terminate the first of April–
My partner, Mr Herndon, has been to Menard to see the land there; and he reports it as worth about $3–25 cents per acre, that it will sell best in 40 acre lots, and probably would bring $4, per acre, if it could be sold on a credit– There are 200 acres of it– The time of sale will be about the 1st of April, but is not yet fixed; when fixed, I will write you– The sale will be piece by piece, applying the proceeds first to the
<Page 2>
Blanchard debt, and so much as it takes to pay it will be without redemption, & the purchaser will get immediate possession– The remainder will be subject to redemption, & immediate possession will not be given–
Majr[Major] Mobley writes me that he shall try to be here at the sale; and I think it will be to your interest to be here also– Both being present, you can by agreement, sell a piece on credit whenever you see any thing can be made, or saved by it– Besides, R. Latham who owns one undivided half of the piece near Burkhardt's says he wants to either buy or sell– In giving the value, I mean, the undivided half, mortgaged to you, is worth $400 & rents for $250–
Yours as everA. Lincoln2
<Page 3>
[docketing]
900
300
400
800
650
3050
[docketing]
7200
3300
3000
60.00
195
[docketing]
900
300
400
800
650
3050
[docketing]
3175 20 on 29t Aug[August]
31/2
9525 60
1587 60
11113.20
3175–20
3286.33 Amt[Amount] principal and int.[interest] due day sale3
<Page 4>
SPRINGFIELD Ill.[Illinois]
FEB[February]
19
5
Dr W. FithianDanvilleIllinois–
[docketing]
A Lincoln4
1Abraham Lincoln wrote and signed this letter, including the address on the last sheet, which was folded to create an envelope.
2Lincoln is referencing a lawsuit involving William Fithian, William Blanchard, and Mordecai Mobley. Mobley gave Blanchard a promissory note for $1,000 and secured the note with a mortgage on five lots in Springfield, Illinois, and two hundred acres in Menard County, Illinois. Blanchard assigned the notes and mortgage to Fithian. Mobley gave Fithian three promissory notes totaling $1,590 and secured the notes with a mortgage on the same property. After Mobley failed to pay, Fithian retained Lincoln & Herndon and sued Mordecai Mobley, Martha Mobley, and Blanchard in an action of foreclosure in the Sangamon County Circuit Court to foreclose the mortgage. Fithian dismissed the case concerning Blanchard. Fithian and Mobley agreed on a judgment against Mobley for $1,080 on the Blanchard mortgage without redemption and $2,095.20 on the Fithian mortgage with redemption. The court sold all of the land for a total of $2,423. Fithian accepted two drafts totaling $949.34 as satisfaction of the judgment on the condition that Mobley would pay both drafts at maturity.
Lincoln first discussed this lawsuit in a letter to Fithian dated September 14, 1849.
For the documents related to this case, see Fithian v. Moblely et al., Martha L. Benner and Cullom Davis et al., eds., The Law Practice of Abraham Lincoln: Complete Documentary Edition, 2d edition (Springfield: Illinois Historic Preservation Agency, 2009), http://www.lawpracticeofabrahamlincoln.org/Details.aspx?case=138924.
3These figures may have been related to the judgment in the case and the sale of the land to satisfy the judgment, but the numbers do not match up precisely.
4Fithian wrote this docketing.