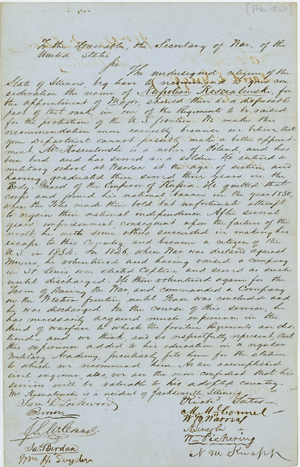 Petition of Samuel D. Lockwood and Others to George W. Crawford, [February 1850]1
To the Honorable, the Secretary of War, of the United States.Sir:
The undersigned, citizens of the State of Illinois, beg leave to recommend to your consideration the name of Napoleon Koscialowski, for the appointment of Major, should there be a disposable post of that rank, in one of the Regiments to be raised for the protection of the U.S. frontier.2 We make this recommendation more earnestly, because we believe that your Department cannot possibly make a better appointment. Mr Koscialowski is a native of Poland, and has been bred and has served as a soldier. He entered a military school at Warsaw at the age of sixteen, and having graduated then served three years in Body-Guard of the Emperor of Russia. He quitted that corps and joined his national banner in the year 1830., when the Poles made their bold but unfortunate attempt to regain their national independence.3 After several years' imprisonment, consequent upon the failure of the revolt, he with some others succeeded in making his escape to this country, and became a citizen of the U.S. in 1834. In 1846, when War was declared against Mexico, he volunteered and having raised a company in St Louis, was elected Captain and served as such until discharged. He then volunteered again for the Term of During the War, and commanded a Company on the Western frontier until Peace was concluded and he was discharged. In the course of this service, he has necessarily acquired much experience in the kind of warfare to which the frontier Regiments are destined– and we think, and so respectfully represent, that this experience added to his education in a regular Military Academy, peculiarly fits him for the station to which we recommend him. As an accomplished civil engineer, also, we are the more confident that his services will be valuable to his adopted country– Mr Koscialowski is a resident of Jacksonville, Illinois.4
1The exact date of this petition is unclear. However, since Abraham Lincoln mentioned this petition in a February 20, 1850 letter to Secretary of War George W. Crawford, it was most likely also created sometime in February of 1850.
2This is a reference to General Winfield Scott’s recommendation, made in his annual report to the U.S. War Department dated November 3, 1849, that the United States nearly double the total number of enlisted men in the U.S. Army. Scott argued that “threats of hostilities” on the U.S. frontier as well as the recent acquisition of territory from Mexico necessitated this increase in U.S. military forces. President Zachary Taylor endorsed Scott’s recommendations during his annual address to the U.S. Congress, which he delivered on December 24, 1849.
On June 17, 1850, Congress passed an act to increase the rank and file of the U.S. Army and encourage enlistments. The act specifically empowered the president of the United States to increase the number of privates serving on the western frontier as well as at “remote and distant stations.” The act made no mention of an accompanying increase in the number of U.S. Army officers, however.
H.R. Exec. Doc. No. 5, 31st Cong., 1st Sess. (1849), 13, 98-99; “An Act to Increase the Rank and File of the Army, and to Encourage Enlistments,” 17 June 1850, Statutes at Large of the United States 9 (1862):438-39.
3This is a reference to the Polish-Russian War of 1830-31, which began when a group of young Polish officers attending the Warsaw Military Academy revolted against the Russian Empire’s rule of Poland. Newspapers in the United States covered the war with great interest, and the editors of many papers drew strong parallels between the Polish struggle for independence and the American Revolution. Ultimately, however, Russian forces encircled the city of Warsaw and defeated the Polish revolutionaries.
Joseph W. Wieczerzak, “The Polish Insurrection of 1830-1831 in the American Press,” The Polish Review (Winter-Spring 1961), 6:53, 57; Joseph Hordynski, History of the Late Polish Revolution, and the Events of the Campaign (Boston: Carter and Hendee, 1832), 377-78.
4Koscialowski’s name does not appear in the official registers of the officers and agents of the government for 1851 or 1853, so apparently he did not receive the appointment.
Register of all Officers and Agents, Civil, Military, and Naval, in the Service of the United States, on the Thirtieth September, 1851 (Washington, DC: Gideon, 1851); Register of Officers and Agents, Civil, Military, and Naval, in the Service of the United States, on the Thirtieth September, 1853 (Washington, DC: Robert Armstrong, 1853).

Petition of Samuel D. Lockwood and Others to George W. Crawford. [1850-02-XX]. /documents/D200643. The Papers of Abraham Lincoln Digital Library.