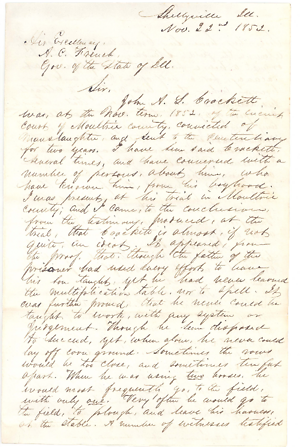 Anthony Thornton to Augustus C. French, 22 November 18521
Shelbyville Ill.
Nov. 22nd 1852.His Excellency,A. C. French,Gov. of the State of Ill.Sir,
John A. L. Crockett was, at the Nov.[November] term, 1852, of the circuit court of Moultrie county, convicted of Manslaughter, and sent to the Penitentiary for two years. I have seen said Crockett, several times, and have conversed with a number of persons, about him, who have known him, from his boyhood. I was present at his trial in Moultrie county; and I came, to the conclusion, from the testimony, produced, at the trial, that Crockett is almost, if not quite, an idiot. It appeared, from the proof, that, though the father of the prisoner had used every effort to have his son taught, yet he had never learned the multiplication table, nor to spell. It was further proved, that he never could be taught to work, with any system or Judgement. Though he seem disposed to succeed, yet, when alone, he never could lay off corn ground. Sometimes the rows would be too close, and sometimes ten feet apart. When he was using two horses, he would most frequently go, to the field, with only one. Very often he would go to the field, to plough, and leave his harness, at the stable. A number of witnesses testified
<Page 2>
that they have seen Crockett, very frequently, alone, in the field, standing by his plough, or with a hoe, in his hand, and gazing at vacancy, for a half of an hour, and an hour,— when there was nothing to attract his attention. It was proven, that, though 26 years of age, he had never manifested any fondness for the society of men; but rather a distaste; and that his conversation and association had always been with children. Witnesses, to the number of ten or more, who had known him, from his boyhood, expressed the opinion, that he had very little, if any reason; and that upon the slightest excitement, they were satisfied, he was not conscious of right and wrong.
It does seem to me, from the testimony, at the trial, that it would be cruel and inhuman, to inflict punishman, upon such a man.
I have carefully examined four petitions, marked A. B. C. & D., presented to me, by Elliott Crockett, the father of the unfortunate young man. I am personally acquainted, with most of the signers. They reside, in Shelby, Coles and Moultrie counties ^His fathers residence is near where the three counties join–^ I recognize, among them, a number of our most respectable and moral citizens; and a number of them are Mr Crocketts’ neighbors, and have known his son from his infancy. I also recognize, among the signers a reputable physician of coles county
<Page 3>
who has attended upon young Crockett. Four of the Jury, who sat upon the case, as well as the clerk and Sheriff of Moultrie county, and nearly all the prominent citizens of Sullivan, including the merchants and a physician, have signed the petition, marked D.
The father of young Crockett will present this to you. John Crockett is now, in the custody of the sheriff of Moultrie county, until the 1st of December.
If consistent with the discharge of the duties of your Excellency, you can grant a pardon, to this young man, you would not only render a favor, to a large number of your fellow-citizens, but to the cause of humanity.
Respectfully your Obt. Sert.[Obedient Servant]Anthony Thornton.
[endorsement]
[11]/[22]/[1852]
Abraham LincolnFrench, Augustus C.
I assisted in the defence of J. A. L. Crockett; and, of course, heard and noted the evidence; and I concur generally with the statement of Mr Thornton, above– I think him, most clearly, a proper obj subject of the Executive Clemency–
A. Lincoln–2
<Page 4>
His Excellency,A. C. French,Springfield,Ill.[Illinois]
1Anthony Thornton wrote and signed this letter, including the address on the last sheet, which was folded to form an envelope. Abraham Lincoln wrote the added text on the second sheet about Elliott Crockett’s residence.
2Lincoln wrote and signed this endorsement.
Lincoln had joined Thornton in defending John A. L. Crockett in the Moultrie County Circuit Court. Along with Thornton, Lincoln joined Eliott Crockett’s campaign to get his son pardoned, writing a petition to Governor Augustus French signed by citizens of Shelby and Moultrie counties. Judge David Davis and State’s Attorney David B. Campbell joined Lincoln, other attorneys, several jurors, and county officials from Shelby, Coles and Moultrie counties seeking clemency for Crockett. Although some students of the case claim that Governor French granted a pardon, there exists no documentation for this assertion. French’s final decision in the matter is unknown.
Elliott Crockett gave Lincoln a promissory note for his legal services but died in 1855, leaving the note unpaid. In December 1856, Lincoln sued Elliott Crockett's estate for payment in the Shelby County Court. The court ruled for Lincoln and awarded him $64.12.
Letter, Document ID: 89442; Petition for Pardon, Document ID: 89443, 89444, 89445; Certificate, Document ID: 89446, People v. Crockett, Martha L. Benner and Cullom Davis et al., eds., The Law Practice of Abraham Lincoln: Complete Documentary Edition, 2d edition (Springfield: Illinois Historic Preservation Agency, 2009), http://www.lawpracticeofabrahamlincoln.org/Details.aspx?case=135617; Lincoln v. Alexander, Martha L. Benner and Cullom Davis et al., eds., The Law Practice of Abraham Lincoln: Complete Documentary Edition, http://www.lawpracticeofabrahamlincoln.org/Details.aspx?case=136711; George R. Dekle, Sr., Prairie Defender: The Murder Trials of Abraham Lincoln (Carbondale: Southern Illinois University Press, 2107); 66-67; James W. Trent, Jr., Inventing the Feeble Mind: A History of Intellectual Disability in the United States (Oxford: Oxford University Press, 2017), 5.