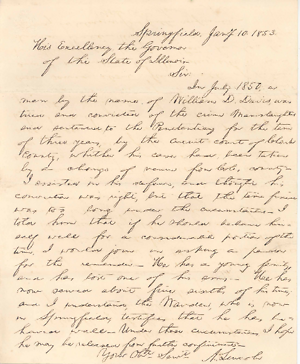 Abraham Lincoln to Joel A. Matteson, 10 January 18531
Springfield, Jany 10. 1853.His Excellency, the Governor of the State of Illinois–Sir:
In July 1850, a man by the name of William D. Davis, was tried and convicted of the crime Manslaughter and sentenced to the Penitentiary for the term of three years, by the circuit court of Clark county, whither his case had, been taken by a change of venue from Coles county– I assisted in his defence, and thought his conviction was right, but that the term fixed was too long under the circumstances– I told him that if he should behave himself well for a considerable portion of the time, I would join in asking a pardon for the remainder– He has a young family, and has lost one of his arms– He has now served about five sixths of this time; and I understand, the Warden, who is now in Springfield, testifies that he has behaved well– Under these circumstances, I hope he may be released from further confinement–2
Your Obt Servt[Obedient Servant]A. Lincoln
<Page 2>
His ExcellencyThe Governor of the State of IllinoisPresent–
[docketing]
A. Lincoln letter in favor of the pardon of Wm D Davis of Vermillion County3
1Abraham Lincoln wrote and signed this letter, including the address on the second sheet, which was folded to create an envelope.
2In the case People v. Davis, William D. Davis was arrested in November 1849 for the murder of Henry W. Louthan in Coles County, but released on the condition that he appear in court when summoned. After failing to appear several times, the Coles County Circuit Court revoked his conditional release, and ordered him taken into custody. On May 1, 1850, a Coles County grand jury indicted him for murder, and Davis retained Orlando B. Ficklin, Alexander P. Dunbar, Albert G. Jones, and Lincoln for his defense. They motioned for a change of venue, and, on July 1, 1850, Justice Justin Harlan moved the case to the Clark County Circuit Court. The court eventually found Davis guilty of manslaughter and sentenced him to three years in the Illinois State Penitentiary. Lincoln was one of many people to petition Governor Joel A. Matteson for Davis’s release. There is no evidence that Davis was released early.
Writ of Scire, Document ID: 38889; Order, Document ID: 38885; Writ of Capias ad Respondendum, Document ID: 38887; Judge’s Docket, Document ID: 38888; Petition for Pardon, Document ID: 54728, People v. Davis, Martha L. Benner and Cullom Davis et al., eds., The Law Practice of Abraham Lincoln: Complete Documentary Edition, 2d edition (Springfield: Illinois Historic Preservation Agency, 2009), http://www.lawpracticeofabrahamlincoln.org/Details.aspx?case=135871; Charles H. Coleman, Abraham Lincoln and Coles County, Illinois (New Brunswick, NJ: Scarecrow Press, 1955), 95.
3It is unclear who wrote this script.