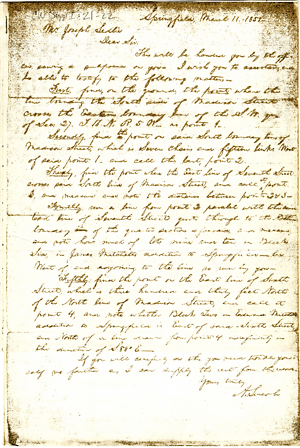 Abraham Lincoln to Joseph Ledlie, 11 March 18511
Springfield, March 11. 1851Mr Joseph LedlieDear Sir:
This will be handed you by the officer serving a subpoena on you– I wish you to ascertain, and be able to testify to the following matters–
First, find, on the ground, the point where the line bounding the South side of Madison Street crosses the Eastern boundary line of the S. W.[Southwest] qua(rter) of Sec:[Section] 27. T.[Township] 16. N.[North] R.[Range] 5 W[West]– as point 1–
Secondly, find a ^the^ point on said South boundary line of Madison Street, which is Seven chains and fifteen links West of said point 1– and call this last, point 2.
Thirdly, find the point where the East line of Seventh Street crosses said South line of Madison Street, and call ^it^, point 3, and measure and note the distance between points 2 & 3–
Fourthly, run a line from point 2 paralel with the said East line of Seventh Street quite through to the Northern boundary line of the quarter section aforesaid, and measure and note how much of lots nine and ten, in Block Six, in James Mitchell's
<Page 2>
addition to Springfield–2 be West of, and adjoining to the line so run by you–
Fifthly, find the point on the East line of Sixth Street, which is three hundred and thirty feet North of the North line of Madison Street, and call it point 4, and note whether Block Two in Edward Mitchell's addition to Springfield is East of said Sixth Street, and North of a line drawn from point 4 indefinitely in the direction of S[South]88°E[East]–
If you will carefully do this, you need trouble yourself no farther as I can supply the rest from the records–3
Yours trulyA. Lincoln
<Page 2>
[docketing]
A. Lincoln
1Abraham Lincoln wrote and signed this letter.
2James Mitchell could not be positively identified.
3The tracts Lincoln references were in Springfield, Illinois. Thomas M. Neale had been the surveyor for Sangamon County responsible for surveying the land donated to secure the county seat for Springfield. Lincoln had served as Neale’s assistant. At the time of this letter, Joseph Ledlie was the county surveyor.
Lincoln wanted Ledlie to testify in two property disputes that Lincoln was handling for Harriet B. Neale, Thomas M. Neale’s widow. In November 1850, Harriet B. Neale retained Lincoln & Herndon and sued Grover Ayers and Isaac S. Britton in actions of ejectment in the Sangamon County Circuit Court for unlawfully withholding property from her. In both cases, the parties reached an agreement, and the court awarded the properties to Ayres and Britton, respectively. Lincoln took no fee from Mrs. Neale.
John M. Palmer, ed., The Bench and Bar of Illinois: Historical and Reminiscent (Chicago: Lewis, 1899), 1:159; John Carroll Power and S. A. Power, History of the Early Settlers of Sangamon County, Illinois (Springfield, IL: Edwin A. Wilson, 1876), 539-40; Michael Burlingame, Abraham Lincoln: A Life (Baltimore: The Johns Hopkins University Press, 2008), 1:78-79; History of Sangamon County, Illinois (Chicago: Inter-State, 1881), 689; Neale v. Ayres, Martha L. Benner and Cullom Davis et al., eds., The Law Practice of Abraham Lincoln: Complete Documentary Edition, 2d edition (Springfield: Illinois Historic Preservation Agency, 2009), http://www.lawpracticeofabrahamlincoln.org/Details.aspx?case=139963; Neale v. Britton, Martha L. Benner and Cullom Davis et al., eds., The Law Practice of Abraham Lincoln: Complete Documentary Edition, http://www.lawpracticeofabrahamlincoln.org/Details.aspx?case=139965.