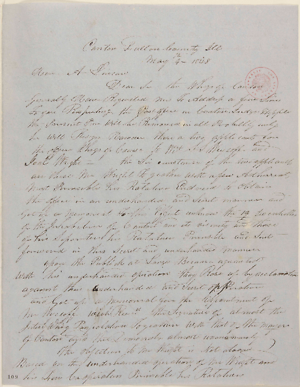 Hugh Martin to Abraham Lincoln, 9 May 18481
Canton Fulton County Ill
May 9th 1848Hon. A LincunDear Sir
the Whigs of Canton Generally Have Requested me to Address a few Lines to you Respecting the Post office in Canton. Judge Hipple the Present Pm[Postmaster] will be Removed in all Probillity unless he will Resign. However there a two applicants for the office Whigs of Caurse to Wit S S Weycoff and Joal Wright– the Sir cumstanse of the two applicants are these Mr Wright to geather with a few Adherrents Most Prinsible his Ralatives Endaved to obtain the office in an underhanded and Secret manner and Got up a Memorial to this Effect unknow the 19 [?], of the Inhabitur of Canton and its visinity and those of his Soporters his Ralatives Prinsible and Sent forward in this Secret and underhanded manner
upon the Publick at Large Became aquainted with this underhanded operation they Rose up by acclamation against thus underhanded and Secret opperation and Got up a Memorial for the Appointment of Mr Wyecoff wich Recevd[Received] the Signature of almost the Intire Whig Poupalation to geather With that of the[ ?] of Canton and the Democrats almost unanamously
The objection to Mr Wright is Not aloan Based on the underhanded operation of Mr Wright and his Ten Cooperators Prinsible his Ralatives
<Page 2>
Since Writing.The foregoing it has Been Sogested to me that Mr Wrights few adherrents are Representing the Effort of the appointment of Mr Wyecoff to be a Loco operation it is true a Number of Democrats has Signed Mr W. Petition But I Repute without fear of Contradiction that Mr Weycoff has almost the unamous Soport of the Whigs and So farr are the Whigs Resolved up on this matter that if Mr Wright Should Get the appoint ment that thay Will Petition the Pm General in Mass for his Removal for the Following Reasons 1d that he has Been Removed from the P[Post] Office for Good & valled Charges– 2d That he is by No meens the Choise of the People Say the Whigs and 3d That him and his Ralatives has Been endeavering to Obtain the appointment in a Secret underhanded and unmanly manner—This I write at the Spatial[Special] Request of the Large Majority of the Whigs &c[etc]
H Martin
<Page 3>
But Mr Wright has Been aformer Postmaster in Canton and in 1841 he was Removed for Grave and Well founded Charges Which Charges Still Remain On file in the General Post office the Detail of those Charges are Beyont the Limits of this Letter Suffice to say that it is Well Known here that three Several and Well founded Charges has Been Prefered against him Either of Which any Post master General would Remove2
Your Hon. is Well aware that if Mr Wright Should be appointed after Being thus Removed it would Subject the administration to much Sensuree it is the Sollemn Determination of the People at Large that if Mr Wright will obtain the appointment to Memorialise the Post master General for his Immediate Removal as he is by no means the Choise of the People and the Secret and underhanded manner Resorted to by Mr Wright and his Ralatives the People at Large has taken meterial objections of
it is Reported that Mr Wright and his friends Rely on your Hon. Influance in this matter therefore it is Deemed Expediant to apprise you of the true State of thing as thay Rely Exist. you will find by Enquiry of the [?] and the Whigs at Large in Behalf of Whoom I am Requested to apprise you that those are the fats as thay Rely Exist3
Respectfully your &cHugh Martin
<Page 4>
CANTON Ills.[Illinois]
MAY ^10^
FREE
Hen– A. LincolnMember of CongressSpringfieldIll
1Hugh Martin wrote the entirety of this letter, including the address on the last page, which has been folded to create an envelope.
2For more on the context of Joel Wright’s removal as postmaster, see: Hugh Lamaster and William Phelps to Abraham Lincoln.
3Joel Wright would receive the appointment, replacing Henry Hipple sometime after September 1849, and holding the position until 1855.
Register of all Officers and Agents, Civil, Military, and Naval, in the Service of the United States, on the Thirtieth September, 1849 (Washington, DC: Gideon, 1849), *469; Register of all Officers and Agents, Civil, Military, and Naval, in the Service of the United States, on the Thirtieth September, 1851 (Washington, DC: Gideon, 1851), 526*; Register of Officers and Agents, Civil, Military, and Naval, in the Service of the United States, on the Thirtieth September, 1855 (Washington, DC: A. O. P. Nicholson, 1855), 330*.