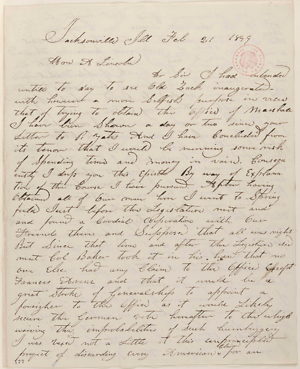 William K. Lindsay to Abraham Lincoln, 21 February 18491
Jacksonville Ill Feb 21 1849Hon A LincolnDr[Dear] Sir
I had intended untill to day to see Old Zack inaugerated— with however a more Selfish purpose in view that of trying to obtain the office of marshall I have been Shown a day or two since your Letter to R Yates And I have Concluded from its tenor that I would be running some risk of Spending time and money in vain.2 Consequently I drop you this Epistle By way of Explanation of the Course I have pursued. After having Obtained all of our men here I went to Springfield Just before the Legislature met and and found a Cordial cooperation with our Friends there and Supposed that all was right But Since that time and after the Legislature did meet Col Baker took it in his head that no one else had any Claim to the office Except Francis Arens and that it would be a great Stroke of Generalship to appoint a foreigner to the office as it would Likely secure the German vote hereafter to the whigs waiving the improbabilities of such humbuggery I was vexed not a Little at this unprincipled project of discarding every American ^Claim^ for an
<Page 2>
for an American office that might be set up It does not become me to say any thing of Arens. but I venture to predict that this master stroke of ned will prove in the end a running sore to me ^him^ I now for one tell him that it Dont suit the Kink of blood that runs in my veins. I also Learned from some quarter that you were pledged to Bond which Left me apparently without any Show in the fight as I thought in washington. But I concluded as I had put myself to some trouble to obtain my papers I would at Least have them Laid before the department. Consequently I sent them to Col McClernand with a request that he would have them Laid there. I am now however satisfied that I ought to have sent them to you and I am sorry that I did not do so, but hope this explanation will satisfy you on the subject Lincoln I have been a wheelhorse of the party here for the Last 17 years I have not asked any thing in return untill now and I Should not now Do so ^now^ But from the shattered Situation of my Constitution, And the Idea of Being unceramoniously kicked out of the way By men for whom and with whom I have so Long labored Does not set well upon a Kentucks Stomach. I will thank you twice if you will inform the Department of the
<Page 3>
Character of my petitioners I believe you know them all. I cannot ask you to use any particular Influence in my Behalf for that office as there are some honerable men I Believe also applicants But I request you to see that I have a fair Shake which I fear I will not have if ned is not watched. I Shall convince ned in the next two years that one American can whip five mexicans in a regular pitched Battle, Judge Thomas has written to Underwood on the Subject Brown to Morehead Henry to Corwin and I hope you will See that I am fairly represented, not much news here, Dick is badly Seared not without cause about some of his votes. he has his head and heart set on a seat in Congress and he is quite Sensitive about small matters I think it will pass off without much harm, Wishing you health and prosperity3
I Remain very resp.[respectively] yoursWm K. Lindsay
1William K. Lindsay wrote this letter in its entirety.
2Abraham Lincoln’s letter to Richard Yates has not been located.
3Neither Francis A. Arenz nor Lindsay received the appointment; President Zachary Taylor appointed Benjamin Bond U.S. marshal for Illinois, and he held the job until 1853.
Register of all Officers and Agents, Civil, Military, and Naval, in the Service of the United States, on the Thirtieth September, 1849 (Washington, DC: Gideon, 1849), 247; Register of all Officers and Agents, Civil, Military, and Naval, in the Service of the United States, on the Thirtieth September, 1851 (Washington, DC: Gideon, 1851), 267; Register of Officers and Agents, Civil, Military, and Naval, in the Service of the United States, on the Thirtieth September, 1853 (Washington, DC: Robert Armstrong, 1853), 259.