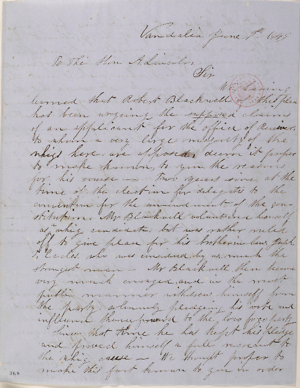 Josiah B. Herrick and Others to Abraham Lincoln, 9 June 18491
Vandalia June 9th 1849To The Hon A. LincolnSir
We, having learned that Robert Blackwell of this place has been urgeing the supposed claims of an applicant for the office of Receiver, to whom a very large majority of the whigs here are opposed, deem it proper to make known, to you, the reasons for his course–2 Two years since, at the time of the election for delegates to the convention for the amendment of the constitution, Mr Blackwell volunteered himself as ^a^ whig candidate; but was rather ruled off to give place for his brother-in-law, Joseph T. Eccles, who was considered, by us, much the strongest man– Mr Blackwell then became very much enraged, and in the most public manner withdrew himself from the party, solemnly pledgeing his vote and influence thence forward to the loco foco party
Since that time he has kept his pledge and proved himself a full recreant to the whig cause– We thought proper to make this fact known to you in order
<Page 2>
that the different solicitations for your influence in behalf of the applicants for office in this place might not give the appearance of contention and disorganization among the whigs when such is not the fact. We beg you to rest assured that the true whigs of Fayette are very unanimous in their feelings in regard to this matter.
We again ask that your influence may be used in favor of Col. Remann for Receiver knowing that, had the conduct of the two applicants come under your ^own^ observation, you would at once espouse his cause–
We also learn that Mr Blackwell has applied for the Office of Register, but trust that his application will receive no favor from you– Col[Colonel] Remann is our choice for Receiver and Mr Wm M. Black for Register in preference to any and all others
Most Respectfully Yours