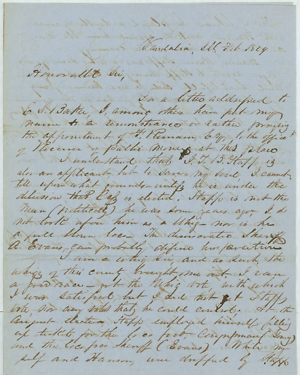 Alexander P. H. Doyle to Abraham Lincoln, February 18491
Vandalia, Ill, Feb 1849Honoralbl Sir,
In a letter addressed to E. D. Baker, I, among others have put my name to a remonstrance, or rather praying the appointment of F. Reman, Esq,[Esquire] to the office of Receiver of Public Moneys at this place,
I understand that J. T. B. Stapp is also an applicant, but to save my soul, I cannot tell upon what grounds—unless he is under the delusion that Cass is elected.2 Stapp is not the man (politically) he was some years ago, I do not look upon him as a Whig— nor is he a full blown loco— The democratic Sheriff A. Evans,— can probably define his position
I am a whig Sir, and as such, the whigs of this county brought me out. I ran a good race.— got the Whig vote, with which I was satisfied, but I did not get Stapp[']s vote, nor any votes that he could control; At the August election, Stapp employed himself filling up tickets for the loco foco, Congressman (Young) and the loco foco Sheriff (Evans). While my self and Hanson, were dropped by Stapp
<Page 2>
Tho’[Though] I believe he played a double game with Hanson, worked against him all day and voted for him in the evening.3
Hanson, knew Stapp was a whig some years ago, wrote to Stapp during the campaign and beautifully did he use him, going against him all day — voting for him in the evening— And at the Presidential election, he merely found time to reach the Polls in the shank of the evening and voting— after staying home all day.
Not so when he wants to beat, a whig Sheriff, Probate, Magistrate or Constable or even a whig Senator or Congressman then the whiskey flies all day— Hurrah for the locos and plenty of sugar; Reman is a choice, firm and never flinching whig he can get every whig in this county on his petition, and has already every Member (whig) except two of the last legislature— He labored hard for Taylor, and would make a good and faithful officer.
You Sir, I Know to be a good whig— and if you are in want of a whig vote, in this section, mine you will get; but you dont know who holds on to Whig principles in our county, as well as you did when you
<Page 3>
came among us; I have lived in this county 20 years and— tho we whigs are few in number, we have but few traitors— we hold our organization— and when a whig has a chance to receive some of the benefits of office— it is but just that those who stand to their post tho’ weal or woe, should be selected,
With much Respect
I remain, Yours &c[etc]A. P. H. Doyle
<Page 4>
[docketing]
02/XX/1849
No 9
Letter of A. P. H. Doyle to Hon A. Lincoln, for F Remann as Receiver at Vandalia Ill
4
1Alexander P. H. Doyle wrote the body of the letter. The docketing on page four is in another hand.
2Reference to the presidential election of 1848, where Whig candidate Zachary Taylor defeated the Democratic candidate Lewis Cass.
3In the congressional election for third district held in August 1848, Timothy R. Young defeated George M. Hanson, polling 8,207 votes (61.3%) to 5,151 (38.4%) for Hanson. In the county election for sheriff, Doyle lost to Aiken Evans.
Howard W. Allen and Vincent A. Lacey, eds., Illinois Elections, 1818-1990 (Carbondale and Edwardsville: Southern Illinois University Press, 1992), 8; Newton Bateman and Paul Selby, eds., Historical Encyclopedia of Illinois and History of Fayette County ed. by Robert W. Ross and John J. Bullington, (Chicago: Munsell, 1910), 2:685.
4Frederick Remann did not receive the appointment. From 1849 to at least 1851, James T. B. Stapp was the receiver in Vandalia.
Register of all Officers and Agents, Civil, Military, and Naval, in the Service of the United States, on the Thirtieth September, 1849 (Washington, DC: Gideon, 1849), 137; Register of all Officers and Agents, Civil, Military, and Naval, in the Service of the United States, on the Thirtieth September, 1851 (Washington, DC: Gideon, 1851), 141.