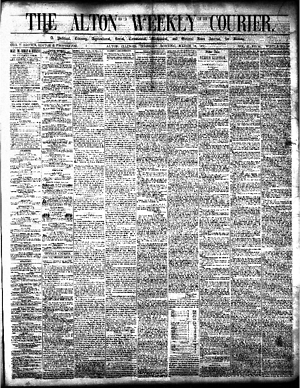 Robert Smith to John T. Stuart, Abraham Lincoln, and Benjamin S. Edwards, 24 February 18541
Springfield, Feb. 24, 1854.Gentlemen:
The Legislature of Illinois at its present extra session, has passed an act, recognizing a certain association called the “Atlantic and Mississippi Railroad Company,” and having for its object the construction of a railroad from Terre Haute to Illinoistown.2 This company pretended to organize under the first section of the general railroad law of Illinois, approved Nov.[November] 5th, 1849, as will appear from their articles of association, filed in the office of the secretary of state.3Subsequently to the filing of these articles most of the subscriptions to the capital stock of the company were made.
It is said, however, that in some respects, these articles, so filed, are not in accordance with the requisitions of the law, and that at the time of the recent action of the Legislature in the premises, there was not in existence a “corporation formed,” within the meaning of the proclamation of the Governor, under which the Legislature was convened.4It is said, moreover, that the ten per cent. required by the law to be paid, previously to filing the said articles of association, was never actually paid in, and that this last allegation is susceptible of easy proof.5 It is important to me and to others that the precise legal position of this company should be understood; will you, therefore, examine the general railroad law above referred to— the articles of association, as filed in the office of secretary of state, the proclamation of the Governor, under which the present extra session is convened, and such other laws as may bear on the subject, and furnise[furnish] me with your written opinion upon the following question:
1st. Whether the corporation is legally formed?
2nd. Have they such an organization as entitles them to come before the present Legislature, under the proclamation of the Governor.
3rd. What effect will the passage of the bill, at this session of the Legislature, have upon the association, if not heretofore legally organized?
4th. Under the existing organization, is any subscription, heretofore made, binding upon any subscriber, and can the collection of such subscription be enforced?
5th. Can the company issue bonds and make a security that would be valid?
By giving to these inquires an early and careful attention, you will much oblige.6
Yours, very respectfully,ROBERT SMITH.Messrs.[Messieurs] John T. Stnart, Ab. Lincoln and B. S. Edwards, Springfield, Ill.[Illinois]
1This letter appeared in the March 16, 1854 issue of the Alton Weekly Courier. The original has not been located.
2Despite a delay in progress due to strong opposition in Illinois, the Atlantic and Mississippi Railroad gained approval by the Illinois General Assembly which, on February 23, 1854, passed an act authorizing the construction of the railroad.
“An Act Recognizing and Authorizing the Construction of the Mississippi and Atlantic Railroad,” 23 February 1854, Laws of Illinois (1854), 79-80.
3Section one of the act providing a general system of railroad incorporations, passed by the Illinois General Assembly on November 5, 1849, reads in part: “Be it enacted by the People of the State of Illinois, represented in the General Assembly, That any number of persons, not less than twenty-five, being subscribers to the stock of any contemplated railroad, may be formed into a corporation for the purpose of constructing, owning and maintaining such railroad,” if certain requirements are met.
“An Act to Provide for a General System of Railroad Incorporations,” 5 November 1849, Laws of Illinois (1849), 18.
4Governor Joel A. Matteson’s proclamation announced on January 9, 1854, that an extra session of the Legislature would convene on February 9. In regards to railroads, the proclamation stated that the session would “pass laws recognizing the existence of and conferring additional powers upon corporations formed, or which may be formed, prior to the action of the Legislature thereon, under the act to provide for a general system of railroad incorporations, approved Nov. 5. 1849; declare the public utility of these works; sanction the route and termini thereof; and authorize the construction of the same.”
Weekly Rock Island Republican (IL), 18 January 1854, 1:3.
5Section two of the railroad incorporation act states, “Such articles of association shall not be filed in the office of the secretary of state until ten per cent, on the amount of the stock subscribed thereto shall have been actually and in good faith paid, in cash, to the directors named in such articles, nor until there is endorsed thereon, or annexed thereto, an affidavit, made by at least three of the directors named in such articles, that the amount of stock required by the first section has been subscribed, and that ten per cent, on the amount has actually been paid in.”
“An Act to Provide for a General System of Railroad Incorporations,” 5 November 1849, Laws of Illinois (1849), 18.
6John T. Stuart, Lincoln, and Benjamin S. Edwards responded to this letter on March 1, 1854, detailing the flaws in the organization of the company. Nevertheless, the Illinois Supreme Court upheld a lower court ruling that the company was legally organized under Illinois law, with Chief Justice Samuel H. Treat opining that the company had been perfected to prosecute the work to completion.
In April 1854, Lincoln served as plaintiff attorney in the case People ex rel. Moulton v. Sandford et al. in the Madison County Circuit Court. Samuel W. Moulton claimed that Edward Sandford, John Brough, and others unlawfully held offices in the unchartered Mississippi and Atlantic Railroad Company. Lincoln issued a quo warranto writ to Illinois state’s attorney to prevent Sandford and others from continuing in those roles unless proof was demonstrated of their legality. Sanford argued that the Illinois General Assembly had chartered the railroad, and the case was dismissed.
Illinois Daily Journal (Springfield), 19 April 1854, 3:4; People of the State of Illinois, on the Relation of Eldredge S. Janney, Appellants, v. The Mississippi and Atlantic Railroad Company, Appellees, 14 Ill. (Peck), 440-46; People ex rel. Moulton v. Sandford et al., Martha L. Benner and Cullom Davis et al., eds., The Law Practice of Abraham Lincoln: Complete Documentary Edition, 2d edition (Springfield: Illinois Historic Preservation Agency, 2009), http://www.lawpracticeofabrahamlincoln.org/Details.aspx?case=137476.