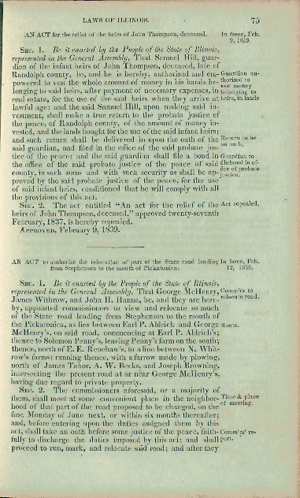 Related Document(s):
A Bill to Authorize the Relocation of a Part of the State Road Leading from Stephenson to the Mouth of Pickatonica

In force, Feb.[February] 12, 1839.
AN ACT to authorize the relocation of part of the State road leading from Stephenson to the mouth of Pickatonica.
1
Comm’rs [Commissioners]to relocate road.
Route.
Sec.[Section] 1. Be it enacted by the People of the State of Illinois, represented in the General Assembly, ThatGeorge McHenry , James Withrow, and John H. Hanna, be, and they are hereby, appointed commissioners to view and relocate so much of the State road leading from Stephenson to the mouth of the Pickatonica, as lies between Earl P. Aldrich and George McHenry’s, on said road, commencing at Earl P. Aldrich’s; thence to Solomon Penny’s, leaving Penny’s farm on the south; thence, north of E. E. Renehaw’s, to a line between N. Whitrow’s farms; running thence, with a furrow made by plowing, north of James Tabor, A. W. Becks, and Joseph Browning, intersecting the present road at or nearGeorge McHenry ’s, having due regard to private property.2
Time & place of meeting.
Com’rs’[Commissioners'] report
Compensation.
Sec. 2. The commissioners aforesaid, or a majority of them, shall meet at some convenient place in the neighborhood of that part of the road proposed to be changed, on the first Monday of June next, or within six months thereafter; and, before entering upon the duties assigned them by this act, shall take an oath before some justice of the peace, faithfully to discharge the duties imposed by this act; and shall proceed to run, mark, and relocate said road; and after they
<Page 2>
shall have completed said work, they shall make out a report describing said road as relocated, and deliver a copy to the county commissioners’ court of Henry county, where the same shall be filed; and the court shall allow said commissioners a reasonable compensation for their services.
Sec. 3. After said commissioners shall have changed that part of said road, it shall be opened and kept in repair, as other roads are.
Approved, February 12, 1839.
1Wyatt B. Stapp presented a petition of the citizens of Warren and Knox counties to the House of Representatives on January 12, 1839, requesting a road from Macomb to Knoxville. Stapp introduced HB 168 on January 19. The House passed the bill on January 23. The Senate passed the bill on February 7. The Council of Revision approved the bill on February 12 and the act became law.
Journal of the House of Representatives (Vandalia, IL: William Walters, 1838), 201, 240, 266, 268, 368, 385, 392; Journal of the Senate (Vandalia, IL: William Walters, 1838), 217, 283, 293, 313.
2The General Assembly authorized the laying out of this road in an act passed in 1837.

An Act to Authorize the Relocation of a Part of the State Road Leading from Stephenson to the Mouth of Pickatonica. [1839-02-12]. /documents/D270981b. The Papers of Abraham Lincoln Digital Library.