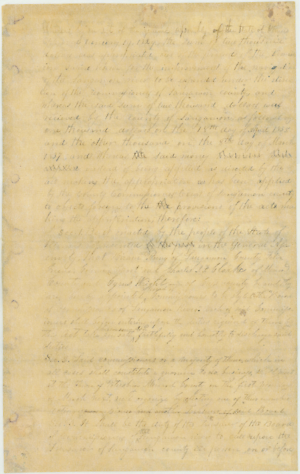 1
Whereas by an act of the general assembly of the State of Illinois approved January 19, 1829, the sum of two thousand dollars was appropriated out of the proceeds of the Vermilion saline reserve for the improvement of the navigation of the Sangamon river to be expended under the direction of the Commissioners of Sangamon county, and whereas the said sum of two thousand dollars was received by the county of Sangamon, as follows, viz: one thousand dollars on the 18th day of April 1835, and the other thousand on the 8th day of March 1837; and Whereas, the said money has never been applied instead of being applied as directed by the act making the appropriation w has been applied by the County Commissioners’ Court of Sangamon county to objects foreign to the the provisions of the acts making the appropriation; therefore:
Sec.[Section] 1. Be it enacted by the people of the State of Illinois represented by the peop in the General Assembly, That Hiram Penny of Sangamon County, Felix Greene; Colemon Smoot[,] and Charles J. F. Clarke of Menard County and Cyrus Wright of Cass county be and they are hereby appointed ^a Board of^ Commissioners to be styled the “Board of Commissioners of Sangamon River.” Each of said Commissioners shall before entering upon the duties required of them by this Act take an oath ^before some J. P.[Justice of the Peace]^ faithfully and honestly to discharge said duties
Sec. 2. Said commissioners or a majority of them, which in all cases shall constitute a quorum to do business, shall meet at the Town of Petersburg Menard County on the first monday of March next, and organize by electing one of their number Acting Commissioner and another Treasurer of said Board
Sec. 3. It shall be the duty of the Treasurer of the Board of Commissioners of ^the^ Sangamon river to call upon the Treasurer of Sangamon county in person, on or before
<Page 2>
the first Monday in April next for the money appropriated by the act above referred to, and it is hereby made the duty of the Treasurer of Sangamon county when so called on to pay over to the Treasurer of the Board of Commissioners aforesaid the above sum of two thousand dollars together with six per cent ^interest on the same thereon,^from the date of the receipt of said money from the State, taking his receipt therefor.
Section 4. It shall be the duty of the Acting commissioner of the Board of Commissioners appointed by this act, to proceed without unnecessary delay to ^the^ prosecution of the improve of the navigation of the Sangamon River, in such manner as the Board may order and direct, commencing at the mouth of said River, and extending up the same as far as the means will justify, and the said Acting commissioner is hereby authorized to call upon the Treasurer, of the Board whose duty it shall be to pay over from time to time, such sums of Money as may be necessary to enable him to perform the duties required ^of him^ by this act
Section 5. It shall be the duty of the Board of commissioners to hold stated quarterly meetings at the town of Petersburg, and the Acting commissioner is hereby required to make a Report to said Board at each of said meetings, exhibiting specifically the amount of disbursements made by him during the preceding quarter, giving the names of all persons to whom money has been paid, for what purpose, and the amount to each, and present a vouchers for the same. The said Commissioner shall also file a copy of said Report, signed by the Treasurer and at least two members of the Board, with the county Clerk of Menard County, who shall safely preserve the same.
Section 6. The Board of Commissioners shall receive such pay for services to be rendered by them, as they may deem just and reasonable not exceeding two dollars per day to the acting Commissioner, nor one dollar and a fifty cts.[cents] to the Balance of the Board.
<Page 3>
<Page 4>
Section 7. Should any vacancy happen in the Board the same shall be filled by the County court of the County in which the member may have resided at the date of this Act, whose seat may become vacant.
Section 8. The Board of Commissioners shall have power to Revoke, at any Regular meeting of the same, any appointment or agency established by them, and appoint or elect another of their Board to discharge such duties as are required by this Act, and the order of the Board.
Section 9. The Board of commissioners hereby established may, in addition to applying the funds provided by this Act, receive and apply any donations or subscriptions that may be raised by the people and placed in their hands for application, under such restrictions as this Act requires in reference to other funds.
[docketing]
A Bill to improve the Navigation of Sangamon River
[docketing]
[01]/[22]/[1840]
Dawson
Nance
Holmes
[docketing]
182
[docketing]
[01]/[30]/[1840]
Refused to ord[order] to 3d Reading
[docketing]
14
1Thomas J. Nance introduced HB 228 in the House of Representatives on January 22, 1840. The House referred the bill to a select committee. The select committee reported back the bill on January 30 without amendment, the minority of the committee issuing a report and recommending rejection of the bill. The House refused to engross the bill for a third reading by a vote of 21 yeas to 43 nays, with Abraham Lincoln voting nay.
Journal of the House of Representatives, of the Eleventh General Assembly of the State of Illinois, at Their Called Session, Begun and Held at Springfield, December 9, 1839 (Springfield, IL: William Walters, 1839), 228, 302-03.