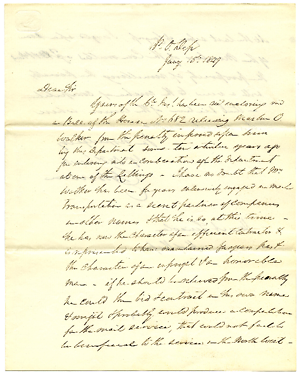 Related Document(s):
A Bill for the Relief of Martin O. Walker

Cave Johnson to Abraham Lincoln, 15 January 18491
P.O. Dep
Jany 15th 1849Dear Sir,
Yours of the 6th Inst has been recd[received] enclosing me a Bill of the House No 682 relieving Martin O. Walker from the penalty imposed upon him by this Department some ten or twelve years ago for entering into a combenation agt[against] the department at one of the lettings–2 I have no doubt that Mr Walker has been for years intensively engaged in mail transportation as a secret partner of companies in other names & that he is so, at this time– he has now the character of an efficient Contractor & is represented to have maintained for years past the character of an upright & an honorable man– if he should be relieved from the penalty he could then bid & contract in his own name & might & probably would produce a competition for the mail service, that could not fail to be beneficial to the service in the North West–
<Page 2>
At the last session of Congress, I urged upon some of the Members of the Committee of P O. & P[Post Office and Post] Roads the propriety of remitting the penalty, with a view to the creation of competition in that section of the Union where it is much needed3
I am respectfully
Yr Obdt Servt[Your Obedient Servant]C Johnson Hon A Lincoln H of Rep
<Page 3>
<Page 4>
[docketing]
Martin O. Walker
15.1
1Cave Johnson wrote this letter in its entirety.
2Abraham Lincoln's letter of January 6, 1849 has not been located. On December 20, 1848, John Wentworth introduced this bill in the House of Representatives. The House referred the bill to the Committee on the Post Office and Post Roads, of which Lincoln was a member.
Martin O. Walker was unpopular in parts of the Post Office Department, and a personal dispute with Postmaster General Amos Kendall had supposedly prompted Kendall to order that Walker was to receive no additional mail contracts.
U.S. House Journal. 1848. 30th Cong., 1st sess., 60; U.S. House Journal. 1849. 30th Cong., 2nd sess., 125; Roger A. Matile, By Trace and Trail: The Stagecoach Era in Northern Illinois (Oswego, IL: Little White School Museum Press, 2010), 34.
3The bill for the relief of Walker apparently died in the Committee on the Post Office and Post Roads. The bill did not become law. Any penalty imposed on Walker must have been remitted, however, for by 1850, he and his partner John Frink had mail contracts in Illinois that totalled $78,000 per year. Additional contracts in Indiana, Missouri, Iowa, Wisconsin, and Michigan totalled over $50,000.
Statutes at Large of the United States 9 (1862); Roger A. Matile, By Trace and Trail: The Stagecoach Era in Northern Illinois, 33.