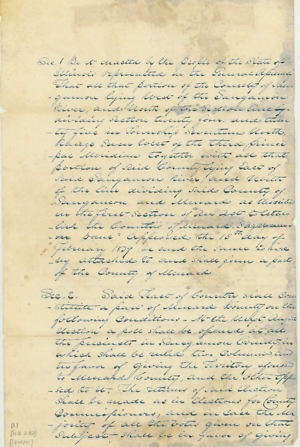 1
Sec.[Section] 1 Be it enacted by the people of the State of Illinois represented in the General Assembly That all that portion of the County of Sangamon lying West of the Sangamon River, and North of the section line [by?] dividing section twenty four, and twenty five in Township Seventeen North, Range Seven West of the third principal Meridian together with all that portion of said County lying East of said Sangamon River, and North of the line dividing said County of Sangamon and Menard as described in the first section of “an act to Establish the Counties of Menard, Sangamon Dane” approved the 15th day of February 1839 be and the same is hereby attached to, and shall form a part of the County of Menard2
Sec. 2. Said Tract of Country shall constitute a part of Menard County on the following conditions: At the next August election a poll shall be opened at all the precincts in Sangamon County, in which shall be ruled two columns, and in favor of giving the Territory aforesaid to Menard County, and the other opposed to it, The returns of said Election shall be made as in Elections for County Commissioners, and in case the Majority of all the votes given on that subject, shall be in favor of giving
<Page 2>
^the^ Territory aforesaid to Menard, then and in that case the Clerk of the County Commissioners Court of Sangamon County shall in five days make out a certificate of that fact and deliver the same to the Secretary of State to be by him filed in his office, and thereafter the said tract of country shall form a part of the County of Menard. If the County Commissioners of Sangamon or Menard Counties shall be dissatisfied with the decision of the Clerk of the County Commissioners Court, they may take an appeal therefrom in ten days to the Circuit Court of Sangamon County, and the decision of the Judge of said Court, shall be final in the case, and a certificate of the decision of the Court shall be filed in the office of Secretary of State, as is provided as aforesaid.
<Page 3>
<Page 4>
[docketing]
No 187 House
[docketing]
186.
[docketing]
H R
A Bill for an Act to change the boundary lines of Menard County
[docketing]
[02]/26/[1841]
Ind. Post.[Indefinitely Postponed]
[docketing]
[02]/[25]/[1841]
Engrossed
1John Bennett introduced HB 282 in the House of Representatives on February 20, 1841. On February 22, Abraham Lincoln participated in a debate on the merits of the bill. On February 26, the House indefinitely postponed further consideration by a vote of 43 yeas to 25 nays, with Abraham Lincoln voting yea.
Illinois House Journal. 1840. 12th G. A., 450, 503, 524.
2The original act establishing Menard County included a proviso in section four that if commissioners located the county seat on the western side of the Sangamon River, approximately 22 sections west and north of Athens would remain in Sangamon County. The affected area did not include the town of Athens, which remained in Sangamon County. The commissioners located the county seat at Petersburg, on the western side of the river. However, the status of these 22 sections remained in question. In 1840, Thomas J. Nance unsuccessfully attempted to address the confusion by repealing the proviso and designating this area as part of Menard County through a bill he introduced. A week prior to introducing this bill, John Bennett had attempted unsuccessfully to repeal section four and change the boundaries with HB 227. The General Assembly did not resolve the issue until it passed an act in 1843 adding land west of the Sangamon River to Menard County and an additional act in 1847 adding land east of the Sangamon River, including Athens, to Menard County.
An Act to Establish the Counties of Menard, Logan, and Dane (1839); A Bill to Amend “An Act to Establish the Counties of Menard, Logan, and Dane,” Approved February 15, 1839 (1840); A Bill to Extend the Boundaries of Menard County and for Other Purposes (1841); “An Act to define the boundary lines of Menard county,” 2 March 1843, Laws of the State of Illinois, Passed by the Thirteenth General Assembly, at their Regular Session (Springfield, IL: Walters & Weber, 1843), 94; “An Act to add part of Sangamon to Menard county,” 28 February 1847, Private and Special Laws of the State of Illinois, Passed by the Fifteenth General Assembly (Springfield, IL: Charles H. Lanphier, 1847), 39.