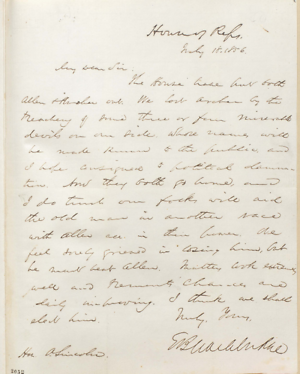 Elihu B. Washburne to Abraham Lincoln, 18 July 18561
House of Reps,
July 18, 1856.My Dear Sir:
The House have put both Allen & Archer out. We lost Archer by the treachery of some three or four miserable devils on our side, whose names will be made known to the public, and I hope consigned to political damnation. Now they both go home, and I do trust our folks will aid the old man in another race with Allen all in their power. We feel sorely grieved in losing him, but he must beat Allen.2
Matters look extremely well and Fremonts’ chances are daily improving. I think we shall elect him.3
Truly Yours,E B WashburneHon. A. Lincoln.
[Envelope]
WASHIN[GT]ON D.C.
FREE
JUL[JULY] 19 1856E B Washburne
M[Member]CHon. A. LincolnSpringfield,Illinois.
1Elihu B. Washburne wrote and signed this letter.
2In Illinois’ Seventh Congressional District in the 1854 Federal Election, Democrat James C. Allen narrowly won an intensely competitive race against Republican William B. Archer. The contest came down to a single vote: Allen received 8,452 votes to Archer’s 8,451. Allen received the certificate of election, but Archer contested the outcome. The U.S. House of Representatives referred the issue to its Committee on Elections. The committee investigated the matter throughout the spring of 1856, and in May, it issued a majority report and resolutions affirming that Archer, not Allen, was the rightful winner of the election. In July, the House took up the report and resolutions. On July 18, the House adopted a resolution affirming that Allen had not won the election and was not entitled to the seat but rejected a resolution affirming that Archer had won the election and was entitled to the seat. At an impasse, the House nullified the results and left the seat vacant until a new election could be held. In August 1856, Allen defeated Archer in a special election.
The “some three or four miserable devils on our side” Washburne references were members of the Opposition that voted yea on the Allen resolution but nay on the Archer resolution. Of the ninety-one representatives voting against the Archer resolution, sixty-one were Democrats, twenty-two were Know-Nothings, and eight were members of the Opposition Party. Of the seven Opposition representatives, four--Timothy C. Day, Solomon G. Haven, Oscar F. Moore, and Job R. Tyson--voted yea on the Allen resolution and nay on the Archer resolution. Washburne’s hope for “political damnation” was fulfilled: none of the four won reelection to the Thirty-Fifth Congress, and none even served another term in the House of Representatives.
Howard W. Allen and Vincent A. Lacey, eds., Illinois Elections, 1818-1990 (Carbondale and Edwardsville: Southern Illinois University Press, 1992), 10; Newton Bateman and Paul Selby, eds., Historical Encyclopedia of Illinois and History of Clark County, ed. by H. C. Bell (Chicago: Middle West, 1907), 22; U.S. House Journal. 1856. 34th Cong., 1st sess., 684, 733, 887, 1022, 1221, 1223, 1226-34; Kenneth C. Martis, The Historical Atlas of Political Parties in the United States Congress, 1789-1989 (New York: MacMillan, 1989), 108, 110; Biographical Directory of the American Congress 1774-1996 (Alexandria, VA: CQ Staff Directories, 1997), 920, 1181, 1545, 1973.
3In the 1856 Federal Election, the Democratic Party nominated James Buchanan to head its presidential ticket. Republicans gathered for their first national convention in Philadelphia considered John McLean and other candidates before nominating John C. Fremont. The American Party, in its final participation in a presidential election, nominated Millard Fillmore. Buchanan defeated Fremont and Fillmore to become fifteenth president of the United States. Buchanan captured Illinois with 44.1 percent of the vote to 40.2 percent for Fremont and 15.7 for Fillmore.
William E. Gienapp, The Origins of the Republican Party 1852-1856 (New York: Oxford University Press), 307-8; David M. Potter and Don E. Fehrenbacher, The Impending Crisis, 1848-1861 (New York: Harper & Row, 1976), 261, 264; Howard W. Allen and Vincent A. Lacey, eds., Illinois Elections, 1818-1990 (Carbondale and Edwardsville: Southern Illinois University Press, 1992), 10.